TheÂ neck dissectionÂ is aÂ surgical procedureÂ for control of neckÂ lymph nodeÂ metastasisÂ fromÂ Squamous cell carcinomaÂ (SCC) andÂ Merkel cell carcinomaÂ (MCC) of the head and neck. The aim of the procedure is to remove lymph nodes from one side of the neck into which cancer cells may have migrated. Metastasis of squamous cell carcinoma into the lymph nodes of the neck reduce survival and is the most important factor in the spread of the disease. The metastases may originate from SCC of the upper aerodigestive tract, including the oral cavity, tongue,Â nasopharynx,Â oropharynx,Â hypopharynx, andÂ larynx, as well as theÂ thyroid,Â parotidÂ and posterior scalp.

Division of the Neck into Levels and Sublevels

Lymph nodes in the neck

To describe the lymph nodes of the neck for neck dissection, the neck is divided into 6 areas calledÂ Levels. The levels are identified by Roman numeral, increasing towards the chest. A further Level VII to denote lymph node groups in the superiorÂ mediastinumÂ is no longer used. Instead, lymph nodes in other non-neck regions are referred to by the name of their specific nodal groups.

Region II, III, IV: nodes associated with the IJV; fibroadipose tissue located medial to the posterior border of SCM and lateral to the border of the sternohyoid. 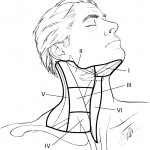 6 levels of lymph nodes in the neck

The radical neck dissection is defined as removing all of the lymphatic tissue in regions I-V including removal of the spinal accessory nerve (SAN), sternocleidomastoid muscle (SCM), and internal jugular vein (IJV). It does not include removal of the suboccipital nodes, periparotid nodes except for infraparotid nodes located in the posterior aspect of the submandibular triangle, buccal nodes, retropharyngeal nodes, or paratracheal nodes.