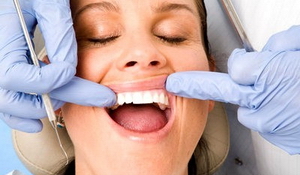 Receding gums, or known dentally as gingival recession, is a common problem in adults but may occur in the younger age group as well. The loss of gum tissue that leads to exposure of the roots of the teeth may exist with or without an accompanying decrease in the height of the jaw bone.

Causes of a receding gum line 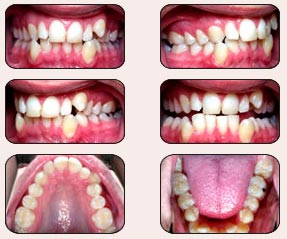 Gum recession is probably caused by multiple factors. The most important factor is probably anatomical variation between individuals. Some individuals have very thin gum tissue facing the cheeks and lips, both soft tissue and bone, and when the buccal plate of the jaw bone is thin, bony dehiscence or fenestrations (isolated areas in which the root is denuded of bone and the root surface is covered only by periosteum and overlying gums) below the soft tissue are more likely. For these reasons, there is more recession on the teeth which are prominent in the arch or with bulbous roots and least on slightly in-standing teeth. When these predisposing factors are present, other insults become important.

The other important factor is probably traumatic tooth brushing. Most individuals clean two or three times a day and some brush excessively in terms of frequency, duration and force used. Trauma from tooth brushing is considered a factor in some individualâ€™s recession, and recession may indicate a need to reduce the frequency and duration of cleaning while maintaining its effectiveness. 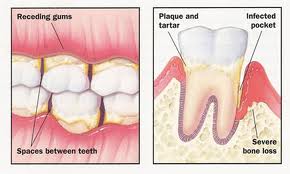 Plaque-induced marginal gum inflammation will also destroy the thin tissue at sites with naturally thin bone relatively quickly. Chronic gingivitis (inflammation of the gums) is the initial stage of chronic periodontitis but having gingivitis does not necessary lead to periodontitis given that you have good oral hygiene. Some may complain of bleeding gums or an unpleasant taste if gingivitis persists. Later on, gum recession or teeth loosening becomes obvious. The gum margins become purplish-red, swollen and flabby and the gum tissues between the teeth gets destroyed leaving gaps in between teeth.

Fixed orthodonticsin the lower front teeth segment is occasionally associated with gum recession in individuals with thin gums facing the cheeks and lips, narrow gum ridge and correction of severe crowding. Plaque control may be compromised during the wearing of an orthodontic appliance and, even over a relatively short period, this can contribute to the problem. 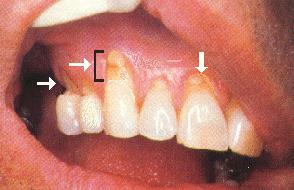 Bruxism or teeth grinding is a clenching or grinding habit when the individual is not chewing or swallowing. This habit can cause damage to the teeth and its supporting tissue including gum line receding. Traumatic bite can also contribute to this.

Snuff is powdered tobacco which, in addition to being inhaled, can also be placed in contact with the oral mucosa in the grooves of the cheeks and inner surfaces of the lips (snuff dipping) which can lead to gums receding over time.

Constant rubbing of the gums against a foreign object, for example piercings in the lip or tongue, can wear away the gums. 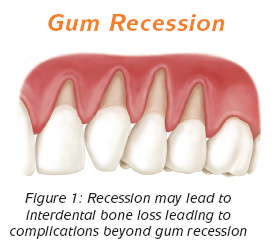 In most cases, gum recession is a progressive condition that happens over time and is not something that occurs overnight. Receding gums may go unnoticed till the condition starts to cause other problems.

Initially, toothbrush abrasion can cause trauma to the gums, which can appear as red, brushing or depressed lesions. Long-term abrasion can lead to gum recession or clefts on the gums. The receding gum margins will expose the root surface of the tooth which is thinner than the tooth enamel of the crown and can result in notches and sensitive teeth.

Exposure of the roots surfaces of teeth can make it vulnerable to erosion (superficial loss of tooth surface as a result of chemical process, usually from non-bacterial acids) by acidic foods or gastroesophageal reflux disease (acid reflux) and also cause sensitive teeth.

The root surfaces of teeth would be also prone to cavities due to the exposed root surface and softer cementum compared to enamel.

Esthetic problems may occur due to teeth appearing longer than normal (more tooth is visible if gums are receded), change in the toothâ€™s color (difference in the color of the crown and root surface) and the space between teeth seems to increase due to receding gum line.

2 thoughts on “Causes of a Receding Gum Line”