In this process, which is called bremsstrahlung (braking radiation), the electron loses much energy and a photon (X-ray) is emitted.
The energy of the emitted photon can take any value up to a maximum corresponding to the energy of the incident electron.

Electrons approach very close to atoms they will be repelled â€“ deflected, by the electron cloud & will be slowed down
This small amount of energy so lost will be transferred to the atom involvedâ€”
Target material gains energy â€“ heated up
Sometimes an electron penetrates through the cloud & approach the nucleus itself
In the powerful electrical field of the nucleus the electron suffers a considerable change in direction,
A large reduction in its speed as well &
energy

The magnitude of an alternating voltage / current- [R.M.S] root mean square value of the voltage / current
This value which is related to power being delivered
Peak voltage-200kVpeak
R.M.S= peak/âˆš2
For eg. 200kVpeak= 141.4kVRMS

SHAPE OF CONTINUOUS SPECTRUM
Very few of the electrons hitting the target make head on collisions.
Most of them lose energy in a series of interactions
Some produce 1/ more X-ray photons-energy of each of which will be less than the maximum
Remainder- production of heat
Overall effect of bombardment- prodn of X-ray photons of all energies from the max downwards
Total amt of radn of any photon energy that is produced increases steadily as the photon energy decreases.
Produced radn- dotted line in diagram
2 factors influence spectrum of radn- which emerges from the tube- spectrum of useful beam
Wall of X-ray tube
Thickness
Material
Target through which the radn has to pass
Lower the energy of photons, fewer will be able to emerge from the target , penetrate through the wall
Increasing quantities of lower energiesâ€“ the emergent radiation quantity falls off markedly at the lower energy end [solid line] in the diagram
Shape of spectrum depends on
Mechanism of X-ray production
Radiation attenuation in the target & tube wall
Max photon E depends on max applied voltage
Min photon energy in the beam wall will depend only on any material through which the photons have to pass

Line / characteristic spectrum
Interaction with individual electrons in the atom
Removal of one of the orbital electrons- result
energy provided from the cathode stream of electron.
Vacancy in the shell â€“ quickly filled from another shell- characteristic photons are emitted 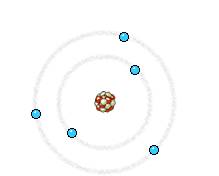 The high energy electron can also cause an electron close to the nucleus in a metal atom to be knocked out from its place.
This vacancy is filled by an electron further out from the nucleus.
The well defined difference in binding energy, characteristic of the material, is emitted as a monoenergetic photon.
When detected this X-ray photon gives rise to a characteristic X-ray line in the energy spectrum.
C. Barkla observed these lines in 1908-09 and was given the 1917 Nobel Prize for this discovery. He also made the first experiments suggesting that the X-rays are electromagnetic waves

Factors on which X-ray emission depends
TARGET MATERIAL-
Continuous spectrum of X- rays-
the photon energies at any particular applied voltage will be the same whatever the target material.
Penetrating power of an X â€“ ray beam [quality]- depends on photon energy of radiation.

Hence, the quality of radn at the given applied voltage is same whatever the target material.
The amount of radn produced [quantity] is not the same for all materials.

The intensity of each line spectrum follows the continuous spectra- proportional to the Z.
Atomic no.+ different energies- characteristic lines are superimposed upon their continuous spectra.
Radiations of very low energy such as L series of tin- are removed as they try to pass through the tube wall.
Importance of contribution of characteristic spectra to total radn output depends on:
Kv applied
Tube wall & filters
Only K radn needs to be considered
There is no charac radn contribution to the useful beams for voltages below 70kV.
For higher voltages, charac radn contribution is 10% of the dose in the range of 80-150kV
After which becomes considerably smaller at 300kV and above.