Filtration of a 200 Kv X-ray Beam By lead

Fig b – shows that lead discriminates against low and high energy photons and in the middle of this energy region can be seen to be transmitting low energy photons more readily than high energies
Why this occurs can be seen in fig .aâ€“ Curve of attenuation coefficient against photon energy

TIN
Tin is the most efficient material to use for filtration of beams generated between 200 and 300 kev
there is a 15 % reduction in the 150 kev component and a reduction of 90% in the 50 kev component
But a considerable amount of radiation is transmitted in the region of 29 kev and just below which is undesirable.

So there is anamolous transmission in this region i.e photons of 25kev are transmitted & this adds radiation to the beam ,by PE effect.

many photons have energies between 25-50 kev in which Sn shows anomalous attenuation properties to itâ€™s 29 kev absorption edge . Therefore Sn is not a suitable material for diagnostic range 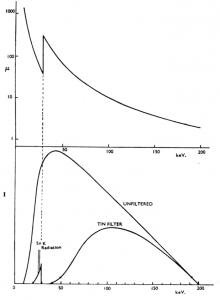 when a 0.4 mm of Sn is introduced into a beam
The discriminating attenuation of Sn can be readily seen

COPPER (Z=29)
Due to itâ€™s low Z it shows less photoelectric effect at any energy than Sn and so discriminates less effectively against low energy photons
Widely used for filtration of 200-300kev.
IT is a less efficient filter than Sn
Has an absorption edge near 9 kev so â€“ has Be backed by Al to remove the anomalously transmitted and characteristic radiation of round about 9 kev

THORAEUS FILTER
It is a type of compound filters made by Swedish physicist Thoraeus
It consists of 0.4mmSn +0.25mmCu+ 1mmAl
It produces the same half value layer with a 200kv beam as a 2mmCu +1mmAl but yields a 20% higher exposure rate

Al is suitable for this range
It has itâ€™s absorption edge at 1.6 kev (below the photon energy range in this spectrum)
It has considerable photoelectric effect at below 50 kev
No backing filter is needed

Cu with itâ€™s K- edge at about 9 kev would be acceptable as a material from 60 kev upwards, but the thickness needed for adequate filtration would be impracticably small
Some however use Cu filters for voltages of the order of 90- 100 kv upwards

With such voltages a major problem is getting of adequate amount of radiation out of the tube
glass of any thickness required to maintain the vacuum would attenuate the beam
So the material used should be such that it serves as a window for the x- ray tube and gives maximum transmission i.e. mat with low atomic no.
Beryllium (Z=4) – most suited.
A tube fitted with beryllium window and used at 30 kv or upwards has enormous outputs because the beryllium hardly attenuates the beam

Newer Filters
X rays most effective & efficient in producing image are between the range of 35-55 kev.
It is desirable to filter from the beam the rays above & below these values.
Aluminium has long been recognized to be used to absorb low energy rays but it also removes high energy rays which tend to reduce image contrast & increase scattered radiation.
Various elements of Z between 62-74 have been used to test their ability to selectively filter x-rays from the beam.
Use of these elements as x ray beam filters removes both low & hih energy rays,
Markedly reduces pt exposure
Increases image contrast.
The phenomenon responsible for filtering inefficient rays from the beam is called K-edge absorption effect.
Selective filtration of both low and high energy photons has been demonstrated with rare earth elements like
Samarium,
Yttrium,
Thulium
activated lanthanum oxybromide ,
GADOLINIUM,
ERBIUM,
NIOBIUM
ACTIVATED GADOLINIUM OXYSULPHIDE
TERBIUM
CERIUM
The use of these materials in combination with Al filters has reduced patient exposure by 20% to 80% compared with conventional Al filtration alone
Selective filtering or ‘Band pass’ effects offered by rare earth elements it is a unique characteristic that allows attenuation of energy photons at each extreme of the spectrum thus reducing exposure and improving the image quality (by reducing the amount of scatter radiation).

Allan Farman and coworkers compared Al- Y filters to conventional filters
The comparisons were made between an Al filter 2.7 mm thick and an Al-Y filter which had a 0.1 mm thick Y layer sandwiched between a 2.7 mm thick Al and an added 1mm Al
Kohn and coworkers compared Al-cu TO Al â€“Y and concluded that Al-Cu filtration yielded a reduction in radiation exposure with less tube loading and Cu filters are considerably less expensive than Y filters Oral Surg Oral Med, Oral Pathol,1989;68:224-6

At both 70 kvp and 90 kvp settings to obtain film density comparable to that with the standard manufacturerâ€™s filtration , it was necessary , after adding Al- Y filtration , to increase the exposure time by approximately 50 %.
The addition of Al-Y filtration resulted in reduced film contrast at both 70 and 90 kvp
Oral Surg,Oral Med, Oral Pathol,1989;68:108-14

Richardâ€™s and others reported that 0.2 mm thickness of Samarium was acceptable as a filter and offered 1/3 less skin exposure when compared with a 2mm thickness of Al even though exposure time increased 2.25 times . In addition they also showed a higher contrast when Samarium filters was used
Oral Surg,Oral Med, Oral Pathol,1989;68:108-14