It is thought that as a result ofÂ inflammationÂ of the facial nerve, pressure is produced on the nerve where it exits the skull within its bony canal, blocking the transmission of neural signals or damaging the nerve. Patients with facial palsy for which an underlying cause can be found are notÂ considered to have Bell’s palsyÂ per se. Possible causes includeÂ tumor,Â meningitis,Â stroke,Â diabetes mellitus,Â head traumaÂ and inflammatory diseases of the cranial nerves (sarcoidosis,Â brucellosis, etc.). In these conditions, the neurologic findings are rarely restricted to the facial nerve. Babies can be born with facial palsy.Â In a few cases, bilateral facial palsy has been associated withÂ acute HIV infection. 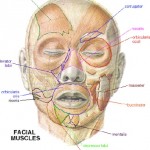 Facial muscles that will be affected in Bell's palsy

In some research theÂ herpes simplex virusÂ type 1 (HSV-1) was identified in a majority of cases diagnosed as Bell’s palsy. This has given hope for anti-inflammatory and anti-viral drug therapy (prednisone and acyclovir). Other researchÂ however, identifies HSV-1 in only 31 cases (18 percent),Â herpes zosterÂ (zoster sine herpete) in 45 cases (26 percent) in a total of 176 cases clinically diagnosed as Bell’s Palsy. That infection with herpes simplex virus should playÂ a major roleÂ in cases diagnosed as Bell’s palsy therefore remains a hypothesis that requires further research.

In addition, the herpes simplex virus type 1 (HSV-1) infection is associated withÂ demyelinationÂ of nerves. This nerve damage mechanism isdifferentÂ from the above mentioned – that oedema, swelling and compression of the nerve in the narrow bone canal is responsible for nerve damage. Demyelination may not even be directly caused by the virus, but by an unknownÂ immune systemÂ response. The quote below captures this hypothesis and the implication for other types of treatment:

It is also possible that HSV-1 replication itself is not responsible for the damage to the facial nerves and that inhibition of HSV-1 replication by acyclovir does not prevent the progression of nerve dysfunction. Because the demyelination of facial nerves caused by HSV-1 reactivation, via an unknown immune response, is implicated in the pathogenesis of HSV-1-induced facial palsy, a new strategy of treatment to inhibit such an immune reaction may be also effective.

Bell’s palsy is aÂ diagnosis of exclusion; by elimination of other reasonable possibilities. Therefore, by definition, no specific cause can be ascertained. Bell’s palsy is commonly referred to asÂ idiopathicÂ orÂ cryptogenic, meaning that it is due to unknown causes. Being a residual diagnostic category, the Bell’s Palsy diagnosis likely spans different conditions that our current level of medical knowledge cannot distinguish. This may inject fundamental uncertainty into the discussion below ofÂ etiology, treatment options, recovery patterns, etc. Studies show that a large number of patients (45%) are not referred to a specialist, which suggests that Bellâ€™s palsy is considered by physicians to be a straightforward diagnosis that is easy to manage. A significant number of cases are misdiagnosed (Ibid.). This is unsurprising from a diagnosis of exclusion, which depends on a thorough investigation.

Bell’s palsy affects each individual differently. In patients presenting with incomplete facial palsy, where the prognosis for recovery is very good, treatment may be unnecessary. However, the more severe cases may require treatment. Patients presenting with completeÂ paralysis, marked by an inability to close the eyes and mouth on the involved side, are usually treated, some of them withÂ smile surgery. Early treatment (within 3 days after the onset) is necessary for therapy to be effective. Steroids have been shown to be effective at improving recovery while antivirals have not.

CorticosteroidÂ such asÂ prednisoneÂ significantly improves recovery at 6 months and are thus recommended.

AntiviralsÂ (such asÂ acyclovir) are ineffective in improving recovery from Bell’s palsy beyond steroids alone. They were however commonly prescribed due to a theoretical link between Bell’s palsy and theÂ herpes simplexÂ andÂ varicella zoster virus.

Surgery may be able to improve outcomes in facial nerve palsy that has not recovered. A number of different techniques exist. Smile surgeryÂ or smile reconstruction is a surgical procedure that restores the smile for people with facial nerve paralysis.

PhysiotherapyÂ can be beneficial to some individuals with Bellâ€™s palsy as it helps to maintainÂ muscle toneÂ of the affectedÂ facial musclesÂ and stimulate theÂ facial nerve. It is important that muscle re-education exercises andÂ soft tissueÂ techniques be implemented prior to recovery in order to help prevent permanentÂ contracturesÂ of theÂ paralyzedÂ facial muscles. Muscle re-education exercises are also useful in restoring normal movement. To reduceÂ pain, heat can be applied to the affected side of the face.Â In individuals with unresolved facial nerve paralysis, transcutaneousÂ electrical stimulationÂ can be an effective treatment strategy.

Even without any treatment, Bell’s palsy tends to carry a good prognosis. In a 1982 study, when no treatment was available, of 1,011 patients, 85% showed first signs of recovery within 3 weeks after onset. For the other 15%, recovery occurred 3â€“6 months later. After a follow-up of at least 1 year or until restoration, complete recovery had occurred in more than two-thirds (71%) of all patients. Recovery was judged moderate in 12% and poor in only 4% of patients. Another study found that incomplete palsies disappear entirely, nearly always in the course of one month. The patients who regain movement within the first two weeks nearly always remit entirely. When remission does not occur until the third week or later, a significantly greater part of the patients developÂ sequelae.Â A third study found a better prognosis for young patients, aged below 10 years old, while the patients over 61 years old presented a worse prognosis.

Major complications of the condition are chronic loss of taste (ageusia), chronic facialÂ spasm, facial pain and corneal infections. To prevent the latter, the eyes may be protected by covers, or taped shut during sleep and for rest periods, and tear-like eye drops or eye ointments may be recommended, especially for cases with completeÂ paralysis. Where the eye does not close completely, the blink reflex is also affected, and care must be taken to protect the eye from injury.

Areas that are innervated by facial nerve

Another complication can occur in case of incomplete or erroneous regeneration of the damaged facial nerve. The nerve can be thought of as a bundle of smaller individual nerve connections that branch out to their proper destinations. During regrowth, nerves are generally able to track the original path to the right destination – but some nerves may sidetrack leading to a condition known asÂ synkinesis. For instance, regrowth of nerves controlling muscles attached to the eye may sidetrack and also regrow connections reaching the muscles of the mouth. In this way, movement of one also affects the other. For example, when the person closes the eye, the corner of the mouth lifts involuntarily.

Around 9%Â of patients have some sort of sequelae after Bell’s palsy, typically the synkinesis already discussed, or spasm, contracture,Â tinnitusÂ and/or hearing loss during facial movement orÂ crocodile tear syndrome. This is also called gustatolacrimal reflex or Bogoradâ€™s Syndrome and involves the sufferer shedding tears while eating. This is thought to be due toÂ faulty regenerationÂ of the facial nerve, a branch of which controls the lacrimal and salivary glands. Gustatorial sweating can also occur.

The annualÂ incidenceÂ of Bell’s palsy is about 20 per 100,000 population, and the incidence increases with age. Bellâ€™s palsy affects about 40,000 people in the United States every year. It affects approximately 1 person in 65 during a lifetime. Familial inheritance has been found in 4â€“14% of cases. Bell’s Palsy is three times more likely to strike pregnant women than non-pregnant women.Â It is also considered to be four times more likely to occur in diabetics than the general population.

A range of annual incidence rates have been reported in the literature: 15,Â 24,Â and 25-53 (all rates per 100,000 population per year). Bellâ€™s palsy is not a reportable disease, and there are no established registries for patients with this diagnosis, which complicates precise estimation.