These are rare and virtually all are malignant. They are most common in the palate. The most common type is an adenoid cystic cancer which has a tendency to invade along nerves and has a high incidence of local recurrence irrespective of the treatment employed. 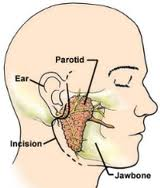 Parotidectomy is the removal of the parotid gland, the largest salivary gland. The paratoid is usually removed because of a tumor, a chronic infection, or a blocked saliva gland. Most parotid gland tumors are not cancerous.

The nerve that closes the eyes, wrinkles the nose, and moves the lips grows through the middle of the parotid gland. Small branches of the nerve might need to be trimmed if the gland is large and the surgeon cannot remove it. Decreased motion of facial muscles might occur while the nerve recovers from surgery. If facial movement does not completely return, rehabilitation can help restore facial movements.

Surgeons think of the gland as two separate lobes: a superficial lobe and a deep lobe.
The facial nerve separates the two lobes. The parotid gland can usually be removed without permanent damage to the facial nerve. A facial nerve monitoring machine (facial nerve stimulator) allows the surgeons to monitor the nerve during the operation.

Benign (non-cancerous) tumors usually need only the superficial lobe removed. But if a benign tumor is located deep in the gland, the deep lobe might need to be partially or completely removed. 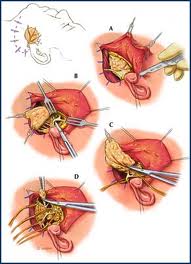 In most cases, the entire gland is removed if the tumor is cancerous. If the tumor is small and low-grade (does not spread and does not grow quickly), the surgeon might be able to remove only the superficial lobe.

General anesthesia is required for a parotidectomy.

During the operation, the surgeon will determine the amount of tissue that should be removed. After the gland or section is taken, it is sent to a pathologist. The pathologist slices a thin section, freezes it, colors it with special dyes, and examines it under a microscope. This procedure is called a frozen section. The frozen section is used to determine if the tumor is cancerous or benign, and the specific type of tumor. The most common type of cancer tumor in the head and neck is called squamous cell carcinoma.

Nerves that link to the saliva producing areas in the parotid gland sometimes link with the nerves that control sweating in the skin. This might cause sweating of the skin at meal time (Frey’s syndrome).

A rare condition, called a salivary fistula or sialocele, can develop and cause saliva to leak through the skin. 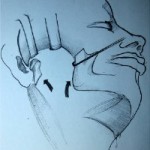 The submandibular gland is also called the submaxillary gland.

A submandibular sialadenectomy is used for chronic infections, stones, and tumors. The most common reason for removing a submandibular gland is as a result of infection that occurs if the tubes that drain saliva become blocked. Blockages usually arise as a result of stones. The saliva secreted by the submandibular gland is a bit thicker than that produced by other salivary glands. Due to its thickness, this saliva can sometimes form little stones in the salivary glands and their ducts similar to those that form in the kidneys. Other indicationsÂ  for surgery include benign â€œlumpsâ€, such as pleomorphicÂ  adenomas. Submandibular gland tumors are often malignant and the entire gland needs to be removed.

The mandibular branches of the facial nerve lies close the gland. The nerve is positioned away from the gland during surgery. A two inch incision is made below the lower jaw.

Many other glands in the mouth make saliva, so the mouth will still have enough saliva after the submandibular gland is removed.

Excision of the Submandibular Calculi

The incision for sublingual gland surgery is through the mouth. No incision is made in the face or neck.

The most common problem with the sublingual gland is development of a mucous cyst called a Ranula. Treatment is usually simple excision through the mouth although more extensive Ranulas (Diving or Plunging Ranula) may also require a Neck incision. Sublingual cancers are rare and require wide excision +/- node dissection.

These occur in various sites including the lips, mouth, nose and throat. The surgery involves local resection of the tumour and whatever surrounding soft tissue or bone is involved in order to get a clear margin.