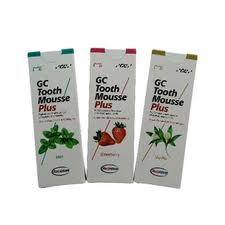 A tooth is made up of enamel, dentine, and the pulp. Enamel is the hardest part of the body, even harder than any bone in your body. This is because enamel is made up of 90% inorganic matter, consisting mainly of hydroxyapatite crystals, which are essentially made up of calcium and phosphate.

After meals, the bacteria in the mouth will break down sugar or carbohydrate left on teeth surface, producing acids which will then cause demineralization of the teeth surface, depleting it of calcium and phosphate. This process starts in enamel, and can progress to the dentine and eventually pulp, causing pulpitis.

The role of fluoride in remineralizing teeth

Fluoride has been proven through many studies to have beneficial effects on teeth. One of these effects is to have fluoride incorporated into the crystals of the teeth to form fluorapatite which can resist caries attack better than the normal hydroxyapatite. 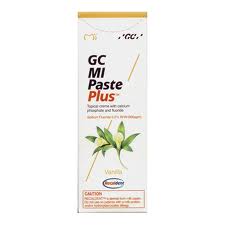 Â What is Recaldent?

We all know that calcium in milk helps to build strong bones and teeth. Recaldent is made from the major protein found in cowâ€™s milk-casein. Recaldent, with the technical name casein phosphopeptides – amorphous calcium phosphate, or CPP-ACP, can penetrate tooth enamel and remineralize the areas that have been affected by plaque bacteria.

How was Recaldent developed?

The School of Dental Science at the University of Melbourne in Australia first discovered the tooth-protective properties of milk in 1981. As far back as 1946 it was reported that the anticariogenic properties of milk were due to casein, calcium and phosphate. Further study by the University showed that it was a particular part of the casein protein component of milk, the casein phosphopeptides, or CPP, that was responsible for the tooth-protective activity.

Since then, the University has conducted many studies that demonstrate how the casein phosphopeptides and amorphous calcium phosphate, or CPP-ACP, work to repair tooth enamel. The University was granted worldwide patents on CPP-ACP that it has licensed exclusively to Recaldent Pty Ltd, who manufactures and markets CPP-ACP under the RECALDENT trademark around the world.

How does RECALDENT work?

Normally, combining calcium and phosphate ions will result in the formation of insoluble calcium phosphate crystals. However, the university was able to show that in the presence of this CPP, calcium and phosphate stay in a soluble or amorphous form (known as amorphous calcium phosphate, or ACP) that can diffuse into the tooth enamel and remineralize areas that have been affected by the activity of plaque bacteria, especially the early white spot lesions. This is the basis of preventing and reversing dental caries.

This does not mean that recaldent can replace fluoride in protecting the teeth. Instead, it works with fluoride by holding the calcium and phosphate ions in soluble form so thath fluoride can combine with them to form the stronger flourapatite. Hence it is strengthens the tooth enamel more effectively than fluoride alone. 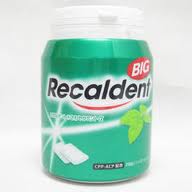 Where can I find Recaldent?

Depending on where you live, you can find RECALDENT in products available from your dentist (GC Tooth Mousse in Europe and Asia; MI Paste in the Americas and Japan- these are water-based, sugar-free topical crÃ¨me containing the Recaldent technology) and in certain sugar-free chewing gums in Asia and the Americas, such as Trident White (USA) and Trident Recaldent (Thailand).

Recaldent can be used on any tooth that presents with early carious lesions. It is particularly useful in people with dry mouth, or xerostomia. Dry mouth causes many changes within the mouth, one of which is the decreased protection of teeth from carious attack by saliva. This leads to higher caries rates. Dry mouth can be caused by various reasons, but we shall look at the role it plays in patients having xerostomia due to radiotherapy.

Following rediation to areas of the head and neck, the patient will have decreased blood flow to the jaws as well as dry mouth due to the permanent destruction of the salivary glands. Dry mouth, as mentioned earlier leads to higher chances of caries. However, extraction is highly contraindicated in such patients because the reduced blood flow to the jaws can cause delayed wound healing, and may even lead to osteoradionecrosis, which basically means that your jaw bone where the tooth was extracted does not heal, and starts to rot (necrose). The necrosis can spread, and in severe cases may even lead to death. It is therefore essential that patients who have received radiotherapy maintain their oral hygiene, at a level that way supersedes their previous level of oral hygiene.

This is where recaldent comes in. Recaldent (MI paste or GC Tooth Mousse) acts to reverse any early lesions effectively, thus preventing the need for extraction. Also, such patients can be advised to chew sugarless gum or suck sugarless mints with Recaldent as they can stimulate saliva flow,Â  relieving the effects of dry mouth. Also, chewing on gums can be a form of mouth exercise to prevent yet another complication commonly found in patients who have gone through radiotherapy, called fibrosis, which will result in limitation of mouth opening.