Where and when gold was first used in connection with the care of teeth as opposed to their decoration are matters of doubt and disagreement. However, it is generally agreed that gold was first used in dentistry over 2500 years ago, and its dental applications have increased steadily, especially during the past 100 of years, to the point where they now absorb over 80 tons of gold per annum. In some cultures, gold teeth and gold teeth caps are a sign of wealth or a means of protecting fortunes, but gold also has its place in the modern history of dental castings.

A plausible hypothesis proposed that manâ€™s change from a way of life entirely dependent on hunting to one dependent on food production from crops and herds, extended his lifespan by one or two decades so that loosening of the incisor teeth resulting from degeneration of surrounding supporting tissue â€“ features of advancing age â€“ become a problem. It suggested that with the development of early gold metallurgy the possibility of holding loose incisor teeth in place by gold wires which was twisted around them and the firmer canines.

Early Use of Gold Wire

Several dental historians have referred to the discovery in a burial shaft at Giza, of two molar teeth held together by a gold wire, along with the articles that are believed to have dated from late 4th or 5th dynasty in the third millennium B.C. (this item is now laced in Pelizaeus Museum in Hildesheim) . some have based on this one discovery belief in existence in Ancient Egypt of prosthetic dentistry; others who suggested that the find might be a part of an amulet, have disagreed.

The wax technique–later adapted to dentistry–was likely invented in ancient China or Egypt. Because the method relied on gravity, which was not enough to draw gold into the small area needed to make a tooth filling, it was only suitable for models or large castings (such as replacing a set of teeth).

The first printed book on dentistry, entitled â€˜Artzney BÃ¼chleinâ€™ (â€˜The Little Pharmacopeiaâ€™) was published by Michael Plum, in Leipzig in 1530. Under this title or â€˜Zen Artzneyâ€™ (â€˜Dental Medicineâ€™) it appears in some fifteen editions issued by various German publishers in the sixteen century. It is largely a compilation from earlier manuscript works by other authors. Chapter 5 of the 1536 edition which is kept at the British Dental Association Library, after a decription of â€˜corrosionâ€™ or decay of teeth, advises on its treatment:

â€˜Scrape and clean the hole and the area of decay with a fine small chisel or a little knofe or a file, or with another suitable instrument, and then to preserve the other part of the tooth, fill the cavity with gold leaves.â€™

Gold leaf was first used to fill teeth in 1483 by Giovanni d’Arcoli, but his method was too tedious and expensive for average patients. Only the wealthiest people could afford having their teeth repaired with gold. 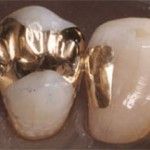 Robert Arthur, who practiced in turn in several American towns, made many improvements to the art of filling teeth with gold. In the opening chapters of his â€˜Treatise on the Use of Adhesive Gold Foilâ€™, he presented a critical amount of common methods of the period. The foil was cut into strips to be used as such, or rolled into â€˜ropesâ€™, or folded into â€˜tapesâ€™. More strips, ropes or tapes were added from the center and space were made for further additions by pushing a wedged shaped instrument into the partially filled cavity to force the gold against the walls until a degree of compaction was achieved that was considered satisfactory. Other dentists cut the ropes or tapes into short lengths or small pieces. One such piece was forced into a corner at the bottom of the cavity, and others are placed around it, one by one, to cover the bottom; the filling was then built up, layer by layer, from further pieces.

The “cohesive gold foil technique” was perfected in 1855. It was much less expensive than gold leaf and made restoration of decayed teeth a real option for a wider range of consumers.

In 1907, William H. Taggart invented a centrifugal casting machine which replaced gravity as a method of filling a mold. Small, highly detailed objects such as gold teeth could now be cast using the wax technique.