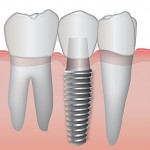 Dental implant can be used to replace a missing tooth

If you lose a tooth because of trauma or disease, a dental professional can create a dental implant to replace that tooth. Implants are titanium rods that replace the root section of the missing tooth and serve as a base for either a porcelain or an acrylic plastic tooth.

Bruxism can lead to wearing down of the teeth

The etiology of bruxism (teeth grinding and clenching) has a multifactorial nature. In the past, morphological factors have been considered the main causative factors. Nowadays, these factors play only a small role, if any. Recent focus is more on pathophysiological factors. For example, bruxism has been suggested to be part of a sleep arousal response. In addition, bruxism appears to be modulated by various neurotransmitters in the central nervous system. Psychological factors are frequently mentioned in relation to bruxism as well. Taken all evidence together, bruxism appears to be mainly regulated centrally, not peripherally.

Bruxism (tooth grinding and clenching) is a potential risk factor for implant failure and Â is generally considered a contraindication for dental implants, although the evidence is usually based on clinical experience only. So far, studies to the possible cause-and-effect relationship between bruxism and implant failure do not yield consistent and specific outcomes. This is partly due to the large variation in the technical and the biological aspects of the investigations. Although there is still no proof that bruxism causes overload of dental implants and their suprastructures, a careful approach is recommended. Practical advices as to minimize the chance of implant failure are given.

How does bruxism affect the implant?

Failure of implants can be classified as early and late. Early failures are the failures that can be seen in a short period of time after the insertion of the implant, while late failres are seen after a period of time. Excessive force is the primary cause of late implant complications. An appreciation of the etiology of crestal bone loss, failure of implants, failure to retain implant restorations, and fracture of components will lead the practitioner to develop a treatment plan that reduces force on implants and their restorations.

The forces are considered in terms of magnitude, duration, direction, type, and magnification. The increase in force magnitude and duration on implants as a result of bruxism is a significant problem. Materials have a fatigue curve, which is related to the intensity and frequency of the force.18 There is a force of sufficient magnitude that one cycle causes a fracture (eg, karate blow to a piece of wood). However, if a force of lower magnitude repeatedly strikes an object, it will also fracture. The wire coat hanger that is bent does not break the first time, but repeated bending will fracture the material. This is not because the last bend was more forceful, but because of fatigue. A bruxing patient is at greater risk for implant fracture over time because the magnitude of the force will increase as the muscles become stronger and the number of cycles accumulates. The chance of an untoward outcome will increase if the force cannot be reduced in intensity and duration.

How is the implant altered to reduce the effects of bruxism on it? 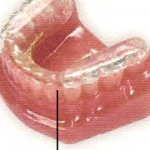 Once the dentist has identified the source(s) of additional force on the implant system, the treatment plan is altered to contend with and reduce the negative sequelae on the bone, implant, and final restoration.