Marius Bridge does not extend to the palate, making it more comfortable for the patient

A Marius Bridge is an implant solution for patients with fully edentulous maxilla, without resorting to using any types of grafts. The Marius is a fixed bridge with a unique, high precision mechanism that allows patients to break it down into two parts for easier access for cleaning or for repairs and/or modifications.

Patients who are seeking replacement of their upper denture with an implant-supported restoration are usually most interested in a fixed restoration option. However,Â  loss of supporting alveolar structure due to resorptionÂ  also means that there will be a loss of lip support, and this lip support is often provided by a denture flange. Attempts to provide a fixed restoration can result in compromises to oral hygiene based on designs with ridge laps.

An alternative has been an overdenture prosthesis, which provides lip support. But it has extensions on to the palate and considerations of patient acceptance is not always promising.

After taking all of these factors into consideration, the Marius bridge was developed as a fixed bridge alternative offering lip support that is removable by the patient for hygiene purposes, with no palatal extension beyond normal crown-alveolar contours. 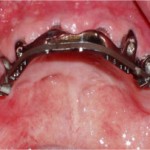 Dental implants in place and attached to a the mesobar, which in turn, attaches to the Marius Bridge.

Marius Lessard was the first patient to be treated by this new non-invasive approach that permits patients with a fully edentulous maxilla to recover the function, esthetics, and comfort of their natural teeth.

Mr. Lessard was treated in 1991 in Quebec City byDr. Yvan Fortin D.M.D who designed the surgical concept of the titled implant and a fixed-removable prosthesis. He is still enjoying the benefits of his dental restoration,Â and we haveÂ named the Marius Bridge in his honor.

A scientific study in collaboration with a Swedish research team was conducted on the first 45 patients treated with the Marius Bridge. The results, which were published in the journal Implant dentistry and related Research in 2002, provided a solid basis for the benefits and merits of this approach.

Since 1992, over 800 patients have been treated by Dr. Yvan Fortin D.M.D , and over 100 dentists have successfully used the Marius Bridge approach. The original, â€œhome-madeâ€ palladium components have given way to machined titanium components, with an 80% improvement in precision.

A second paper, which was published in the Journal of Oral and Maxillofacial Surgery in January 2008, deals with current approaches for treating the upper jaw and shows that the Marius is one of the top choices.

The international launch of the Marius Bridge finally took place in September 2007. This have attracted dentists from clinics across North America to Quebec City for training to enable them to use this approach to treat their patients. Until this day, many others who are also interested are on a waiting list for training in the months to come.

Not only that, numerous laboratories have indicated their interest in becoming accredited in the use of this technology to be able to serve their referring dentists.

The two jutting screws are screwed onto the mesobar, so that there will be no movement of the prostheses during speech

The Marius Bridge is an approach that makes it possible to treat patients with a fully edentulous maxilla, insufficient lip support, and severe bone loss resulting from the extraction of teeth in years gone by. Implant-supported restorative treatment of completely edentulous upper jaws, as an alternative to a complete denture, is frequently an elective preference, and it requires significant patient acceptance beyond the functional improvement of chewing. Patients with moderate to severe bone resorption and thin ridges present additional challenges for adequate bone volume and soft-tissue contours. The Marius Bridge is a surgical and prosthetic implant treatment protocol for completely edentulous maxillae in which optimal lip support and phonetics is achieved in combination with substantial implant anchorage without bone grafting.

Furthermore, it does not compromise with the:

Other than that, patients can request during treatment a spare Marius in the event of accidental breakage and thus remain functional while their bridge is being repaired and/or modified, even if they are outside their region, or even the country.

The Marius is also a precision machined dental implant-grade titanium for maximum safety.

Indications of the usage of Marius Bridge

After 16 years of research and development (R&D), the Marius is finally available to dental professionals world-wide, and to patients who are looking for the least-invasive treatment possible, a treatment that is safer, with no compromise in terms of esthetics, comfort, or access for cleaning.