Integration of dental implants or implantable devices into contemporary orthodontic practice has the following possible advantages: serving as a method of increasing orthodontic anchorage, virtually eliminating patient compliance issues with regard to wearing of appliances, decreasing overall treatment time, and occasionally permitting orthodontic treatments previously thought to be impossible without surgery.

The practice of clinical orthodontics is largely dependent on the availability of anchorage. Anchorage, by definition, is a bodyâ€™s resistance to displacement. Newtonâ€™s third law states that for every action there is an equal and opposite reaction. Thus, orthodontic appliances are designed with this law in mind, the goal being to resist unwanted tooth movement.

According to Proffit, in treatment planning of orthodontics,

it is simply not possible to consider only the teeth whose movement is desired. Reciprocal effects throughout the dental arches must be carefully analyzed, evaluated, and controlled. An important aspect of treatment is maximizing the tooth movement that is desired, while minimizing undesirable side effects.

In orthodontic movement of teeth, segments of teeth that resist movement and serve as â€œanchorsâ€ are used to pull against other segments that are intended to be moved. Usually, the anchor segment will contain more teeth or teeth with greater root surface area than the segment of teeth that are to be moved. This concept of differential anchorage is important in most orthodontic cases, especially more complex situations.

In fact, treatment of certain malocclusions is often limited or defined by the available anchorage. There are numerous ways in which orthodontics has tried to augment anchorage, including auxiliary devices such as headgear, transpalatal arches, and other appliances.

Many of these appliances are awkward or uncomfortable for patients, often leading to less than desired levels of compliance. Thus, treatment outcomes can become compromised.

Only recently has the concept of using dental implants as sources of anchorage been widely accepted as a successful adjunct to orthodontic treatment.

Dental implants have the ability to aid in anchorage either directly or indirectly. Celenza and Hochman described two different types of anchorage as pertaining to the use of implants in orthodontics. Direct anchorage refers to any situation in which forces that originate from the actual implant itself are used to augment anchorage. An example would be a restored dental implant with an orthodontic bracket bonded to the restoration. If conventional orthodontic appliances are used in conjunction with the surrounding teeth and the restored implant, the implant will serve as a stable â€œanchor.â€ That is, the implant will not respond to the forces generated by the orthodontic wires in the same way that the natural teeth do. The implant simply remains stationary while surrounding teeth move. 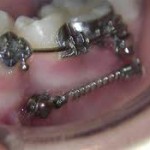 The second type of anchorage, as described by Celenza and Hochman, is known as indirect anchorage, which refers to a situation in which a dental implant stabilizes multiple teeth, which then serve as an anchor unit. The most common method of achieving indirect anchorage is by placing a dental implant, commonly in the midpalatal or retromolar regions, and then linking the implant to the natural teeth by means of a wire or other rigid fixation device, such as a transpalatal arch. The result is a stable anchorage unit composed of multiple teeth that are tethered together by means of a dental implant that serves as additional anchorage. The high level of stability provided by either approach makes it promising for the practice of orthodontics.

There are numerous situations in which additional anchorage would enhance treatment success. Examples of orthodontic treatment of malocclusions that would particularly benefit from dental implant use are as follows: closing edentulous spaces in first molar extraction sites, midline correction when no posterior teeth are present, retracting and realigning anterior teeth with no posterior teeth present, intruding or extruding teeth, stabilization of teeth with reduced bone support, reestablishing the proper transverse and anterior or posterior position of isolated molar abutments, protraction or retraction of one arch, and perhaps many more applications.