Whether or not there is an increase in size or acceleration of growth of the mandible is one of the major controversies in functional appliance therapy. Although many researchers have claimed that the FR causes extra mandibular growth, this study showed that there were no significant differences between the FR and control groups as far as mandibular movement is concerned, the mean FR movement being 4.1 mm, standard deviation 3.0 mm; the control 5.0 mm, and standard deviation 2.6 mm. As the 5.0-mm change in the control was due to normal growth, it can be assumed that the 4.1-mm change in the FR group was no more than normal growth rather than any effect of the appliance. The maximum value seen in the control was 14.2 mm and for the FR it was 12.8 mm; again, because this change in the controls was due to normal growth it must be assumed that even the maximum FR change was no more than normal growth change. That the size of the mandible is unaffected with the FR is supported by evidence from Creekmore and Radney, and Hamilton et al., who found no significant differences between FR and untreated patient groups. 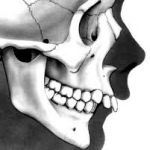 Negative values seen both in the FR and control groups at first seem difficult to explain, after all, the mandible cannot reduce its size. However, it should be remembered that only anteroposterior movements are measured and no amounts of movements in other directions are accounted for. Rotation of the mandible during growth has previously been reported, which probably accounts for the negative values seen. A backwards rotation would worsen a Class II skeletal pattern and, if subjected to a pitchfork analysis, generate a negative value if it exceeds forward growth. Because a backwards pattern of growth rotation is a common finding in Class II discrepancies, one of the aims of FR treatment is to encourage a forward rotation during growth. That the FR group demonstrated slightly more negative values than the controls suggests that this aim of FR treatment is unsuccessful.

The ABCH values represent the maxillo-mandibular differential, the movement of the mandible relative to the maxilla. A positive value means that the mandible has outgrown the maxilla, negative values the maxilla outgrowing the mandible. In the FR group where the mean was 4.0 mm in an anteroposterior direction, no negative values were seen, the minimum value of 0 mm being a situation where the forward movement of the mandible matched that of the maxilla, otherwise, in all instances, the mandible came forward further than the maxilla. It would be expected that in the control group, the mean ABCH to be close to 0 mm, with both jaws growing at the same rate, but the mean value was 1.9 mm with a standard deviation of 1.5 mm and a range of −2.0 to 4.7 mm. In fact, only three patients out of the total control group demonstrated a negative ABCH value, and only two out of 39 had a value within 0.5 or 0 mm. This finding perhaps suggests that there is a differential in growth between the maxilla and mandible, the mandible showing greater anteroposterior movement. 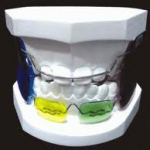 When comparisons are made with the controls’ molar movements, the uppers came forward by the same amount (−1.1 mm), but the lower molars were not seen to come forward, at −0.6 mm total change a statistically significant difference from the FR group.

Johnston suggested that the FR may act as a bite plane disrupting normal intercuspation, thus allowing free movement of the molars. His findings were that the maxillary molars were held static with mesial drift of the lower molars. He did not find, however, that dental (molar) movements are the most significant factor in correction of the Class II malocclusion and certainly the results from this study seem to agree with this. Regarding the lower molars, the results of this study agree with most researchers, suggesting that while there is slight mesial movement of the lower molar, the majority of its movement is due to the forward movement of its dental base.