Amelogenesis imperfecta is a tooth development disorder in which the teeth are covered with thin, abnormally formed enamel, occasionally in conjunction with other dental, oral and extraoral tissues.. Enamel is composed mostly of mineral, which is formed and regulated by the proteins in it. Amelogenesis imperfecta is due to the malfunction of the proteins in the enamel: ameloblastin, enamelin, tuftelin and amelogenin.

Amelogenesis imperfecta is passed down through families as a dominant trait. That means you only need to get the abnormal gene from one parent in order for you to get the disease.

Up to date, mutations in the AMELX, ENAM, MMP20, and KLK-4 genes have been found to cause amelogenesis imperfecta (non-syndromic form). The AMELX, ENAM, KLK-4 and MMP20 genes provide instructions for making proteins that are essential for normal tooth development. These proteins are involved in the formation of enamel, which is a hard, calcium-rich material that forms the protective outer layer of each tooth. Mutations in any of these genes alter the structure of these proteins or prevent the genes from making any protein at all. As a result, tooth enamel is abnormally thin or soft and may have a yellow or brown color. Teeth with defective enamel are weak and easily damaged.

Researchers are looking for mutations in other genes that may also cause amelogenesis imperfecta.

Amelogenesis imperfecta can have different inheritance patterns depending on the gene that is altered. Most cases are caused by mutations in the ENAM gene and are inherited in an autosomal dominant pattern. This type of inheritance means one copy of the altered gene in each cell is sufficient to cause the disorder.

Amelogenesis imperfecta is also inherited in an autosomal recessive pattern; this form of the disorder can result from mutations in the ENAM or MMP20 gene. Autosomal recessive inheritance means two copies of the gene in each cell are altered.

About 5% of amelogenesis imperfecta cases are caused by mutations in the AMELX gene and are inherited in an X-linked pattern. A condition is considered X-linked if the mutated gene that causes the disorder is located on the X chromosome, one of the two sex chromosomes. In most cases, males with an X-linked form of this condition experience more severe dental abnormalities than affected females.

Other cases of this condition result from new gene mutations and occur in people with no history of the disorder in their family.

The enamel of the tooth is soft and thin. The teeth appear yellow and are easily damaged. This condition causes teeth to be unusually small, discolored, pitted or grooved, and prone to rapid wear and breakage. Both baby teeth and permanent teeth are affected.

Researchers have described at least 14 forms of amelogenesis imperfecta. These types are distinguished by their specific dental abnormalities and by their pattern of inheritance.

White flecks on the surface of the teeth in amelogenesis imperfecta

A dentist can identify and diagnose the condition. Diagnosis involves exclusion of extrinsic environmental or other factors, establishment of a likely inheritance pattern, recognition of phenotype and correlation with the dates of tooth formation to exclude a chronological developmental disturbance.

The teeth form a record of dysplasia (abnormal growth). Dental enamel does not “heal” â€“ other than at the microscopic level in the context of early demineralisation caused by caries. As a result, many disturbances of metabolism now resolved, as well as genetic conditions, will be reflected in the appearance of the teeth. Four simple questions are valuable here â€“ does anyone else in the family have anything like this; are all of the teeth affected in a similar manner; is there a chronological distribution to the appearance seen; is there anything in the past medical history which might have caused sufficient metabolic disturbance to affect enamel formation â€“ and form the foundation for differential diagnosis. 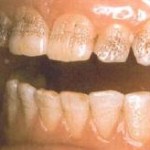 Pitting of the surface of the teeth in amelogenesis imperfecta

The commonest differential diagnosis is dental fluorosis. The variability of this condition, from mild white “flecking” of the enamel to profoundly dense white colouration with random, disfiguring areas of staining and hypoplasia, requires careful questioning to distinguish from AI. Fluorosis may present with areas of horizontal white banding corresponding to periods of more intense fluoride intake and may show the premolars or second permanent molars to be spared (chronological distribution). In the latter case, the history will often reveal excessive fluoride intake either in terms of a habit such as eating toothpaste in childhood, or related to a local water supply.

A similar distribution of findings â€“ chronological enamel hypoplasia â€“ can arise from one of many causes during the time of tooth formation. Ranging from gastrointestinal upset of a prolonged nature, such as coeliac disease (a diagnosis which may not be confirmed until later life), to anti-leukaemic therapy; these causes may be identified from the history and from the chronological distribution of the markings seen.

Molar-Incisor Hypomineralisation (MIH), which shows features quite unlike these findings, has been considered above.

The treatment depends on the severity of the problem. Full crowns will improve the appearance of the teeth and protect them from damage.

Treatment is often successful in protecting the teeth.

The enamel is easily fractured and damaged, which affects the appearance of the teeth, especially if left untreated.

Call your dentist if you have symptoms of this condition.