General Care for People With OI Plus DI

Children with OI and dentinogenesis imperfecta need the same basic care as discussed in Part 1, but they also need to be monitored for cracking, chipping and abrasion of the teeth. Special care will be needed even with the baby teeth. All of the teeth may not be affected by DI, and primary teeth usually are affected to a greater extent than the permanent teeth. Restorative treatment may be needed at some point. 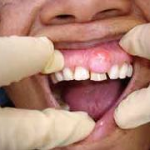 Regular care is needed so the teeth will last as long as possible and to prevent abscesses and pain. Brushing and cleaning has not been shown to cause damage, but will not make teeth affected by DI white. Sealants should be effective on teeth affected with DI as long as the enamel is intact.

Older children and especially adolescents with DI are often embarrassed by their discolored teeth. Different types of veneers can sometimes hide the problem. Bleaching is not recommended because the discoloration is not in the enamel.

If the teeth are wearing excessively, caps (also called crowns), will probably need to be placed on at least some of the teeth. Caps serve to keep the teeth in place and encourage proper development of the jaw. More specialized treatment may be more appropriate for permanent teeth.

A malocclusion is an abnormal relationship between the upper and lower teeth, which creates problems with how the teeth come together. This may be due to the relationship of the upper and lower jaws to each other, the alignment of the teeth, or both. This type of problem includes crooked teeth, â€œunderbite,â€ â€œoverbiteâ€ and â€œopen bite.â€ Treatment is usually provided by an orthodontist. The particular treatment plan depends on the specific problem(s) with the bite and the teeth. If the malocclusion is caused by skeletal discrepancies, then orthognathic (jaw) surgery may be required along with orthodontia. 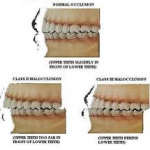 An orthodontist should examine each child with OI around the age of 7 years. At that time early orthodontic interventions in children who are developing a relatively small upper jaw compared to the lower jaw may help decrease the need for later orthognathic surgery.

Although there are only a few case reports and no published studies regarding orthodontia for people with OI, it seems to be safe to treat them if DI is not present. If DI is present, the orthodontist will have to decide if the enamel is strong enough for braces.

Unfortunately, it is difficult to determine how strong the enamel is until it is tried. Conventional practice involves gluing brackets to the teeth for the braces and removing the brackets later. Plastic brackets can be used instead of metal brackets because they can be removed with a hand piece without disturbing the fragile enamel. If there is concern about the enamel cracking off and treatment is still desired, placing bands on all the teeth to hold the brackets may work. Although bands are considered an â€œold fashionedâ€ method, the technique still works. It may be necessary to seek out an older orthodontist who learned to install braces before the current practice of gluing bands directly to teeth was discovered. The orthodontist will need to minimize forces on the teeth as well as movement of teeth over long distances. The wires which are attached to the bands should initiate slow and light movements. Whenever possible, removable orthodontic appliances are preferred. Caps, or crowns, may also be effective in correcting rotations or mildly malpositioned teeth.

In some children with OI the upper jaw, or maxilla, does not grow as much as the lower jaw, or mandible. Sometimes the way that both jaws grow makes it difficult, if not impossible, to bring the teeth together properly, even after orthodontic braces. If the malocclusion is due to a problem with the growth of one or both jaws, then a combination of orthodontic braces and orthognathic surgery may be used to align the teeth. Some period of orthodontic braces is also usually needed after the jaw surgery. There are a few published reports about these surgeries indicating good post-operative healing of the jaws. The same concerns that one would have with any surgery in people with OI, such as potential bleeding problems and reaction to general anesthesia, still apply. Furthermore, the recent use of bisphosphonates to treat different bone disorders triggers many additional questions regarding maxillo facial surgeries.

The dentist needs to consider if the impacted teeth should be left alone or extracted, or if an attempt should be made to move them into a functional position in the mouth. To move a tooth, a coordinated effort is needed between the oral surgeon and the orthodontist to surgically uncover the impacted tooth and glue an attachment onto the tooth so that light force from the braces can be used to bring the tooth into the proper position. The orthodontist may also use braces prior to surgery to be sure there is space to bring the impacted tooth into the proper position.