Tongue thrust (also called reverse swallow or immature swallow) is the common name of orofacial muscular imbalance, a human behavioral pattern in which the tongue protrudes through the anterior incisors during swallowing, speech, and while the tongue is at rest. Nearly all young children exhibit a swallowing pattern involving tongue protrusion, but by the age of six most have switched to a normal swallowing pattern. People who tongue thrust do it naturally and are usually unaware of the behavior.

Since 1958, the term “tongue thrust” has been described and discussed in speech and dental publications by many writers. Many school-age children have tongue thrust. For example, according to recent literature, as many as 67â€“95 percent of children 5â€“8 years old exhibit tongue thrust, which may be associated with or contributing to an orthodontic or speech problem. Up to the age of four, there is a possibility that the child will outgrow tongue thrust. However, if the tongue thrust swallowing pattern is retained beyond that age, it may be strengthened.

At what age does a child usually exhibit a tongue thrust swallowing pattern?

A child exhibits a tongue thrust pattern from birth, because it is an infantile swallowing pattern. It is acceptable to have this swallowing pattern up to the age of 4. Most children will outgrow the infantile pattern and develop the mature pattern of swallowing, not developing a problematic tongue thrust. IF the child has not naturally outgrown the pattern by age 4, the thrust is strengthened, becomes an issue, and will require a training program to correct the thrusting pattern.

Factors that can contribute to tongue thrusting include macroglossia (enlarged tongue), thumb sucking, large tonsils, hereditary factors, ankyloglossia (tongue tie), and certain types of artificial nipples used in feeding infants. In addition, allergies or nasal congestion can cause the tongue to lie low in the mouth because of breathing obstruction, contributing to tongue thrusting.

There are several variations of tongue thrust and related orthodontic problems: 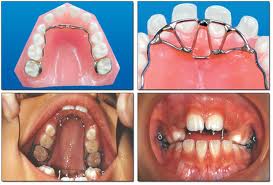 Tongue thrusting can adversely affect the teeth and mouth. A person swallows from 1,200 to 2,000 times every 24 hours with about four pounds (1.8 kg) of pressure each time. If a person suffers from tongue thrusting, this continuous pressure tends to force the teeth out of alignment. Many people who tongue thrust have open bites; the force of the tongue against the teeth is an important factor in contributing to “bad bite” (malocclusion). Many orthodontists have completed dental treatment with what appeared to be good results, only to discover that the case relapsed because of the patient’s tongue thrust. If the tongue is allowed to continue its pushing action against the teeth, it will continue to push the teeth forward and reverse the orthodontic work.

Speech is not frequently affected by the tongue thrust swallowing pattern. The “S” sound (lisping) is the one most affected. The lateral lisp (air forced on the side of the tongue rather than forward) shows dramatic improvement when the tongue thrust is corrected. However, lisping and tongue thrust are not always associated.

There are two methods for treating tongue thrusting. The patient may place an appliance similar to a nightguard in the mouth at night, or may wear a more permanent device that can be removed and adjusted by a dentist. The other method requires oral habit training, an exercise technique that re-educates the muscles associated with swallowing by changing the swallowing pattern. This method must be taught by a trained therapist. Therapy has proven to give the highest percentage of favorable results; however, the appliance is still used and is successful in some cases.