These advantages apply in principle to all self-ligating brackets, although the different makes vary in their ability to deliver these advantages consistently in practice:

low friction between bracket and archwire;

Full engagement is a feature of self-ligation because a clip/slide is either fully shut or it is not. Unintentional partial engagement is not possible. There is no problem of decay of the ligature as with elastic ligatures. However, security of ligation will depend on the clip/slide being robust and not inadvertently opening. Until very recently, this requirement for security of performance was not fully met by self-ligation designs. Secure, full archwire engagement maximizes the potential long range of action of modern low modulus wires and minimizes the need to regain control of teeth where full engagement is lost during treatment.

Friction in vivo and with active wires

It is, however, difficult to be certain how accurately any laboratory simulation of friction reproduces the true in vivo situation. A study by Loftus et al. found that in an experiment with a simulated periodontal ligament, and with slight tip and rotation of the brackets, the friction with Damon SL was not significantly less than with conventionally ligated brackets. Read-Ward et al. reported that the reduction in friction with self-ligation is much less when the wire is active, but this study also showed the considerable methodological problems in measuring friction with active wires, the standard deviation of repeated measurements being very high. Other authors found friction with self-ligating brackets to still be substantially lower even at high values of active torque. A recent paper on this topic, by Thorstenson and Kusy, examined the effects of varying active tip (angulation) on the resistance to sliding. They found that angulation beyond the angle at which the archwire first contacts the diagonally opposite corners of the bracket slot causes a similar rise in the resistance to sliding of both self-ligated (Damon SL) and conventional brackets. However, at all degrees of tip, the Damon brackets produced significantly less resistance to sliding. At a realistic angulation of 6 degrees for an 0.018 × 0.025-inch stainless steel wire, this difference (60 cN) is probably of clinical significance 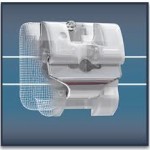 A further factor has been investigated in studies, which found that various vibrations and displacements of a test jig (to mimic intra-oral masticatory forces) can substantially reduce the friction with conventional ligation. This is a valid line of enquiry and an interesting finding, but the question then arises as to how accurately these laboratory studies mimic intra-oral masticatory ‘jiggling’ forces. The full interpretation of laboratory friction studies is clearly difficult and the in vivo situation will show substantial variation. Studies involving tooth displacements, such as rotation or lingual displacement, which create more labial pressure from elastomeric ligatures, would usefully simulate another in vivo factor. Nevertheless, the balance of the current evidence from studies and from clinical experience is that self-ligation provides very significant reduction in friction in all dimensions of tooth movement. The clinical significance of this factor in isolation is hard to estimate and it is more appropriate to consider the combined features of low friction and secure archwire engagement.