Self-ligating brackets have an inbuilt metal labial face, which can be opened and closed. Brackets of this type have existed for a surprisingly long time in orthodonticsâ€” the Russell Lock edgewise attachment being described by Stolzenberg in 1935. Many designs have been patented, although only a minority have become commercially available. Self-ligating braces are defined as “a [dental] brace, which utilizes a permanently installed, moveable component to entrap the archwire”. Self-ligating braces may be classified into two categories: Passive and Active.

Types of self-ligating braces include:

These braces are typically made from stainless steel but, in some cases, are available in ceramic.

Properties of an ideal ligation system

Features of Self ligating brackets

The concept that brackets are ligated via tie-wings is so prevalent that it is worthwhile considering a list of ideal properties of any ligation system. This exercise puts in perspective any assessment of the benefits and difficulties with current self-ligating systems. Ligation should:

be secure and robust;

be quick and easy to use;

be comfortable for the patient. 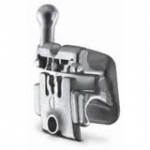 Self ligating bracket from Damon system

It is highly desirable that, once ligated, the system is very resistant to inadvertent loss of ligation. Wire ligatures are good in this respect, whilst elastomeric ligatures are inferior, especially if left for too long without being renewed. The force decay of elastomerics has been well documented.

It is a large advantage if the archwire can be fully engaged in the bracket slot and maintained there with certainty. Wire ligatures do not stretch to an extent that engagement once achieved at ligation is subsequently lost, so they can meet this requirement. Elastomerics are worse, since they may frequently exert insufficient force to fully engage even a flexible wire and the subsequent degradation of their elastic performance may cause a significant loss of full engagement as the elastomeric stretches. Twin brackets with the ability to â€˜figure of 8â€™ the elastomerics are a significant help in this respect, but certainly not a complete answer.

Quick and easy to use

This is a major weak point of wire ligatures and the principal reason for the enormous decline in their use. Maijer and Smith, and Shivapuja and Berger have shown that wire ligation is very slow compared to elastomerics. In the latter study, the use of wire ligatures added almost 12 minutes to the time needed to remove and replace two archwires. This is the largest and very understandable reason why so few wire ligatures are now used.

Wire ligatures are better than elastomerics; producing 30â€“50 per cent of the elastomeric friction forces in one representative study, but the forces still reach undesirable levels relative to those that are ideal for tooth movement. Also, the force normal to the archwire produced by a wire ligature is probably very variable. This force has also been shown to be more variable for elastomeric ligatures than for passive self-ligation. 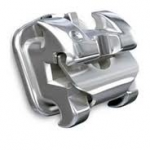 Self ligating bracket from In-Ovation

It is also helpful under some circumstances if the ligation system can â€˜lockâ€™ a tooth to the wire to prevent unwanted movement of that tooth along the wire. When initially placed, an elastomeric in a â€˜figure of 8â€™ configuration increases the friction by a factor of 70â€“220 per cent compared to the â€˜Oâ€™ configuration and this partially meets this requirement.

Elastomerics accumulate plaque more than tie-wires do and fluoride-releasing elastomerics have yet to reach reliably robust performance levels by way of compensation. The ends of wire ligatures are, however, an additional obstacle to oral hygiene.

Comfortable for the patient

Elastomerics are good in this respect, but wire ligatures require careful tucking in of the ends to avoid soft tissue trauma, and can occasionally be displaced between appointments and cause discomfort.

Summary: what is wrong with conventional ligation?

Failure to provide and to maintain full archwire engagement.

For elastomerics, the force (and therefore tooth control) decays and they are sometimes lost.

Wire ties are secure, robust, enable full, partial or distant ligation, and have lower friction than elastomerics. Their largest drawback is the time required for ligation. Elastomerics are quick, but less good in every other respect. Neither method is ideal or nearly as good as a molar tube assembly, which is universally adopted as the â€˜ligationâ€™ of choice on posterior teeth. It is easy to find examples of the deficiencies of conventional ligation, but clinicians have become accustomed to tolerating these shortcomings.