Introduction
The removal of impacted mandibular third molars is a complicated surgical procedure involving soft tissue, muscle and the hardest bone in the skeleton.
History:
Prior to discovery of x-rays, surgeons removed only those teeth which can readily be examined clinically in the oral cavity.
John Tomes (1849) first to describe method of gaining access through a mucoperiosteal flap.

Incision-flap design and reflection mucoperiosteal flap
Aim:
To gain access to the area.
Visualize the overlying bone that must be removed.
Principles:
Flap be large enough for adequate access and visibility of surgical site.
Broad base â€“ wider than the margin.
Incision must be made with smooth stroke of the scalpel which is kept in contact with bone throughout the entire incision.
Incision should be closed over solid bone rather than over a bony defect.
Should avoid vital anatomic structures.
Only a single releasing incision should be used.

Bone Removal:
Aim:
To expose the crown by removing the bone overlying it.
To remove the bone obstructing the pathway for removal of a tooth.

How much bone is to be removed?
Adequate amount of bone should be removed to enable for elevation.
Two ways of Bone Removal
High speed, high torque handpiece and bur technique.
Chisel and mallet technique.
Bur technique:
No. 7/ 8 round bur or a straight no. 703 fissure bur is used.
Adequate.
Ability to be sterilized.

Steps:
Bone on occlusal aspect and on the buccal and distal aspect down to the cervical line of the impacted tooth should be removed initially.
The cortical bone on the buccal aspect of the tooth is removed down to the cervical line.
Bur can be used to remove bone between the tooth and the cortical bone in the cancellous area of the bone called ditching.
Chisel and Mallet technique:
Historical importance.
Very rarely used.
Less bone necrosis than bur technique.
Can cause inadvertent fracture of the bone.
The jaw bone should be supported while using this technique. 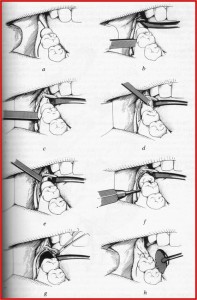 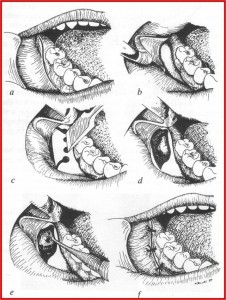 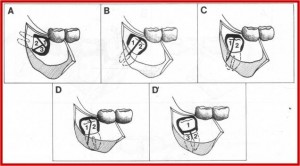 Tooth sectioning, elevation and extraction:
Reduces the amount of bone removal.
Reduces the risk of damage to the neighboring teeth.
Planned sectioning permits the parts of the tooth to be removed separately in an atraumatic manner.
Dependent on angulation of the impacted tooth.
Either bur or chisel.
Bur used in a controlled fashion to avoid damage to vital structure.
Sectioned one half to three-fourths with the bur and the completed sectioned with the elevator.
Elevation:
Coupland elevator.
Winter Cryersâ€™
Straight elevator. 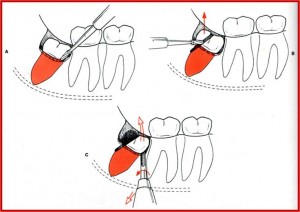 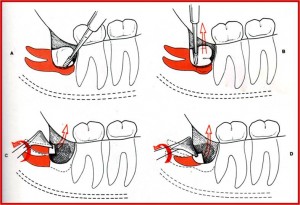 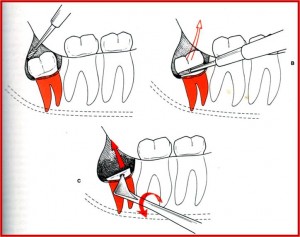 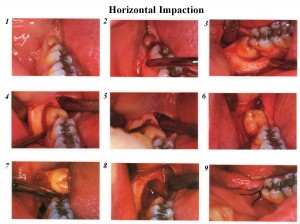 Debridement and Smoothening of Bone margins:
Irrigation of the socket.
Curetting to remove any remaining dental follicle and epithelium.
Look for pieces of coronal portion (especially in carious teeth/ sectioned teeth), check for remnants of bone / granulation tissue, bleeding points.
Check for caries of adjacent tooth.
Round of the margins of the socket.
Control bleeding before suturing.
Closure:
3-0 black silk is used.
Interrupted sutures given and maintained for 7 days.
In case of molars, suture distal to second molar should be placed first and should be water tight to prevent pocket formation.