Darier’s disease, also known as keratosis follicularis or dyskeratosis follicularis, is a rare disorder of keratinization. It is an autosomal dominant genodermatosis with high penetrance and variable expressivity. Its manifestation appears as hyperkeratotic papules primarily affecting seborrheic areas on the head, neck, thorax, and less frequently the oral mucosa.

When oral manifestations are present, the palatal and alveolar mucosae are primarily affected (as seen in figure 1). They usually asymptomatic and are discovered in routine dental examination. Histologically, the lesions present as suprabasal clefts in the epithelium with acantholytic and dyskeratotic cells represented by â€œcorps ronds and grains.â€

Darierâ€™s disease or keratosis follicularis is a rare autosomal dominant genodermatosis, which is characterized by greasy, crusted, keratotic, yellow brown warty papules and plaques particularly over seborrhoeic areas. Although this is a genetically transmitted disease according to a larger series, about 47% of patient had no clear family history, presumably of incomplete penetrance. The disease is caused by mutations in the ATP 2A gene, which encodes the sarco/endoplasmic reticulum Ca2+ ATPase. This disease was first described by Prince Marrow in 1886 and simultaneously by Darrier and White in 1889, independently. In 1917, the first case with oral manifestation was reported by Reenstierna.

The prevalence of this disorder in the population is 1â€‰:â€‰100,000. The sex incidence is equal, although the males appear to be more severely affected than females. The oral mucosa is affected in 50% of the cases and lesions are usually asymptomatic and discovered during routine dental examination. Lesions are represented by multiple firm papules with normal, whitish, or reddish color, primarily affecting the palatal and alveolar mucosa. Initially, papules are reddish and may coalesce, forming crusts that may be ulcerated. Histologically, the lesions present as suprabasal clefts in the epithelium with acantholysis and dyskeratotic cells present as â€œcorps rondsâ€ and â€œcorps grains.â€

â€œCorps rondsâ€ are larger structures usually present in the granular layer and consists of an irregular eccentric and sometimes pyknotic nuclei. Precipitating factors include heat and humidity, mechanical trauma like friction, sunlight, and secondary bacterial infections. Associated anomalies have been described including mental retardation and psychosis. 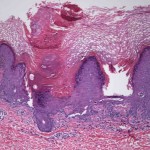 Darierâ€™s disease is an autosomal dominant disease with high penetrance and variable expressivity. Although it is an inherited disease, 47% of the patients with Darierâ€™s disease do not have a family history. Absence of family history could also be attributed to the fact that mild forms of the disease have not been recognized among the family members. Mutations in the ATP2A2 gene found on chromosome 12q, which encodes for a sarco/endoplasmic reticulum calcium ATPase pump (SERCA2) type 2 isoform, are the cause of the disease. Ca2+ ATPases are the key actors in the regulation of calcium in eukaryotic cells and are thus essential to the correct functioning of the cell machinery. Ca2+ ATPase transport Ca2+ from the cytosol back to the endoplasmic reticulum lumen hence mediate stability and adhesion of desmosomes. The mutations in this gene affect Ca2+ homeostasis and result in abnormality in desmosomal stability and adhesion.

Histologically, Darierâ€™s disease is characterized by acantholysis which forms suprabasal clefts and also formation of â€œcorps ronds and grainsâ€ superficially. Corps ronds are usually present in the granular cell layer and show central large round dyskeratotic basophilic masses surrounded by a clear halo-like zone. Darierâ€™s disease must be distinguished histologically from other acantholytic dyskeratoses, such as Hailey-Hailey disease (familial benign pemphigus) and Groverâ€™s disease (transient acantholytic dermatosis). In Hailey-Hailey disease, acantholysis is incomplete, causing the well known â€œdilapidated brick wallâ€ appearance of the lower epidermis. The clinical characteristics of those diseases are different from those of Darierâ€™s disease. Oral lesions are detected in approximately 15% of the patients, and they appear as white papules with a central depression. Here, we report a rare clinical presentation which is confined to the oral cavity. This patient had no cutaneous involvement of the trunk and because of this his diagnosis was not initially suspected. According to the literature, more than 113 familial and sporadic mutations in ATP2A2 have been identified in the disease. However, the attempts at genotype-phenotype correlation have not been successful. Family members with confirmed identical ATP2A2 mutations can exhibit differences in the clinical severity of disease, suggesting that other genes or environmental factors affect the expression of keratosis follicularis.

Dyskeratosis follicularis affecting the skin on the thigh

Although this disease is inherited, novel mutations of the gene can also pass to next generation causing isolated cases without family history as our patient. This disease is mostly affected in 4-5th decades. The affected patient with oral lesions show dried, crusted, itchy lesions on seborrheic areas. Intraoral lesions are usually whitish and show variable consistency. Most patients with severe form of Darierâ€™s disease should receive genetic counseling, including information on the inherited condition and risk of transmission to offspring. Since some conditions are asymptomatic, dental surgeons may diagnose the oral manifestations of this disease in routine examination. Biopsy is necessary to arrive at definitive diagnosis. Patients should be referred for dermatological examination and should be informed about the possible complications like bad odors, caries, and secondary infections. Psychiatric opinion should follow in more severe cases. Therefore, it is important to ensure multidisciplinary approach in the management of patients with Darierâ€™s disease.