A hemangioma, also called a strawberry nevus, is an abnormal buildup of blood vessels from an unknown cause. These can occur in the skin or the internal organs and are usually present at birth, although they also can show themselves a few months later. When on the skin, they are visible red lesions. They tend to be most alarming to parents when they are present on the face or head of infants. Most are treatable, but some are dangerous. 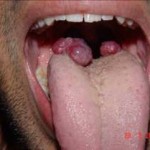 Hemangiomas at the back of the tongue

Hemangiomas of the oral cavity are not common pathologic entities, but, among hemangiomas, the head and the neck are common sites. Most true hemangiomas involute with time, but a certain small percentage do not, which may present with complications that require treatment. An estimated 10-20% of true hemangiomas incompletely involute and require postadolescent ablative treatment.

Over the years, medical research has determined there are different types of hemangiomas. Capillary hemangiomas are on the surface layers of the skin and, as the name would indicate, involve capillaries. They are noticeable red lesions. Cavernous hemangiomas, on the other hand, are not visible red lesions; they are soft, blood-filled cavities below the skin’s surface. Hemangiomas can also be compound (or mixed), meaning they have both superficial and deep components. 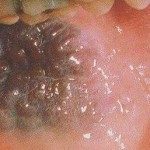 Multinodular hemangioma at the cheek mucosa

Medical research has also revealed that most hemangiomas follow a patterned life cycle. There is an initial rapid growth phase, followed by a rest period, after which the hemangioma begins to involute, or recede. In the rapid growth phase, which can last up to 18 months, the volume and size of the lesion increases dramatically. In the rest period, very little change occurs. In the involution phase, which can take 3 to 10 years, the lesion begins to disappear. Some hemangiomas disappear completely, leaving little or no trace they were present; this can occur with mild superficial lesions. Large cavernous hemangiomas may disappear on their own as well, but will likely leave the skin permanently distorted.Capillary hemangiomas are usually not present at birth but are antedated by a pale, well-demarcated, flat area, most visible with agitation. These prodromal lesions may appear as a pale halo surrounding an area of telangiectasis or as a very fine telangiectasia similar to the port-wine stain.

Cavernous hemangiomas are composed of large, irregular, deep dermal and subcutaneous blood-filled channels that impart a purplish discoloration to the overlying skin. They are typically soft, poorly defined, and readily blanch with compression, giving them a characteristic “bag of worms” feel. The lesion may expand and darken with crying, when agitated, or when placed in a dependent position. Often, a capillary component overlies a cavernous component, and it may be difficult to distinguish these components histologically. Cavernous and mixed hemangiomas demonstrate the same patterns of proliferation as those of capillary lesions. However, involution is often incomplete, depending on the location and the presence of associated arteriovenous malformations.

Hemangioma involving the tongue as well as the mouth

Superficial hemangiomas do not normally present serious medical complications, though understanding this has required medical research and patient observation. Internal hemangiomas can cause severe problems, such as bleeding, and need to be treated immediately and aggressively. However, any visible deformities–particularly large facial deformities–can have psychosocial consequences, resulting in insecurity and/or social interaction issues.The major complications of hemangiomas occur with internal hemangiomas or when the growth of internal or external hemangiomas interferes with body processes, such as vision, breathing, eating, hearing or organ function. Hemangiomas on the eyelid, for instance, can impede normal vision development in young children. Large cavernous hemangiomas can also develop secondary infections and ulcerate. Bleeding is also common with hemangiomas, especially after an injury. Heavy bleeding may require immediate treatment.

Medical research has revealed different medical treatments are appropriate for different hemangiomas, though not all doctors agree on the appropriate course of action.

Most hemangiomas are superficial at first. These can treated with lasers, such as the flash-lamp pulse dye, pump dye, diode and sclero-laser, when caught early. Lasers shrink the vessels, resulting in a smaller lesion. With repeated treatments, the lesion may nearly disappear.

Injections of steroids in the superficial lesion itself (with or without liquid nitrogen cryosurgery) can be used for fairly small hemangiomas that are not on the face. Larger lesions often require oral steroids. Alfa-interferon can be used for hemangiomas unresponsive to steroids, or that are problematic or life-threatening. However, severe complications can occur with walking in 10 to 12 percent of patients taking this medication, so it is not the first course of treatment. Plastic surgery is used for hemangiomas that are unresponsive to other treatments and present life-threatening complications or deformity.

Hemangiomas that cause deformities, grow rapidly or obstruct body or organ functions may require early aggressive treatment, like surgery.