What are the harmful effects of bulimia to the teeth?

A bulimic can hide behind closets and toilets all they want, but they canâ€™t hide the effects that purging (self-induced vomiting) has on their mouth and teeth. Here are some of them:

What role does a dentist play?

A bulimic patient may not even realize that they have a problem other than they are innocently trying to â€œcontrol their weightâ€. They are even more unlikely to admit to being a bulimic if confronted. There are no tell-tale signs other than the effects in the mouth and teeth, therefore a dentist possibly plays a frontline role in identifying a bulimic patient. A dentist should suspect bulimia if a patient comes to him with the following manifestations:

If bulimia is suspected, the dentist should first talk to the patient or the parents about it. The patient may not even be aware of the negative effects of their actions on their teeth, as the erosion may take years before it becomes prominent. Also, the lingual surfaces are affected first, which is unseen if the patient looks into a mirror. If the patient is willing, he or she can be referred to a psychiatrist, as this eating disorder involves a psychological behavior beyond health issues. The dentist should learn how to approach these patients with sensitivity and concern, as most patients will not be willing to talk about their eating disorder. 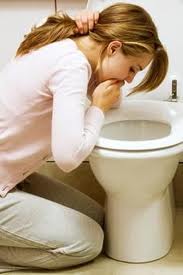 Treatment for teeth and mouth affected by bulimia