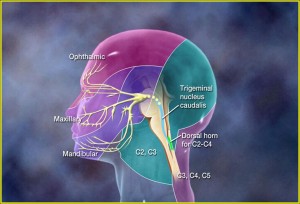 TRIGEMINAL NERVE is the 5th and the largest cranial nerve. It derives its name from the Latin words â€œtresâ€ means three and â€œgeminusâ€ means born together (i.e. three born together), hence the name Trigeminal. It innervates the structures derived from the 1st branchial arch. It mixed nerve i.e. it has a large sensory and a small motor root.

1ST ORDER: These are the receptor neurons; they are the derivatives of the neural crest. Their cell bodies lie in the sensory ganglia. The peripheral branch innervates receptor organs and the central branch enters the brainstem. The area of the skin innervated y a single root is called a dermatome.

2ND ORDER: They have their cell bodies in the embryonic alar plate, derived from the neural tube. Their axons decussate (cross the midline). They ascent in tracts, reach the thalamus, where they terminate in specific sensory nuclei.

3rd ORDER: Have cell bodies in the thalamus. Axons of these thalamic neurons pass to the primary somatosensory cortex of the parietal lobe.

Sensory innervations of face by trigeminal nerve are based upon embryologic origins:

â€¢Â Â Â Â Â  Masseter and temporalis can be seen and felt to be wasted on jaw closure.

â€¢Â Â Â Â Â  On jaw opening the jaw deviates to the affected side because of the weakness of pterygoid muscles.

Peripheral branches of the 3 main divisions may be damaged by surgery or trauma resulting in areas of sensory disturbance and sometimes accompanied by a continuous neuralgic pain. The most commonly affected are supraorbital, infraorbital and inferior alveolar branches.

â€¢Â Â Â Â Â  There may be anesthesia over the sensory distribution. Sensation is tested for light touch with a bit of cotton; pain perception is tested with a pin.

â€¢Â Â Â Â Â  There may be paralysis of the muscles and flaccidity of the floor of the mouth and soft palate.

It is the most commonly encountered disorder of the TG nerve. It is usually seen after 50 yrs of age. It is more common in women. Right side of face is frequently involved. Pain is unilateral, most often in V2 & V3. It is often misdiagnosed.

â€¢Â Â Â Â Â  The stabs of pain may be accompanied by involuntary contraction of the facial muscles, hence the name â€˜tic douloureuxâ€™.

â€¢Â Â Â Â Â  Patients identify one or more triggers to their attacks. These include touching a very specific part of their face, a cold draught, swallowing, brushing etc., tactile triggers may prevent the patient from washing his face, shaving, or even brushing.

â€¢Â Â Â Â Â  Not attributed to another disorder.

â€¢Â Â Â Â Â  Secondary to a vascular loop that compresses the trigeminal nerve a few mm proximal to the pons.

â€¢Â Â Â Â Â  Â A causative lesion, other than vascular compression, has been demonstrated by special investigations and/or posterior fossa exploration.

A substantial amount of cases diagnosed initially as trigeminal neuralgia prove to have other conditions. By far the most common area of confusion centers around teeth.

Facial pain due to-

Carbamazepine gives good and sometimes excellent relief in up to 70% of the patients. Starting dose is 100 mg twice daily, as required over a period of 1 -2 weeks to either the lowest effective dose or the maximal tolerable dose. If Carbamazepine does not work the other drugs can be tried.

In some patients even very determined drug treatment prove unsuccessful, whereas in others there may be only partial or complete relief but only at the cost of unacceptable side-effects. In such circumstances some form of surgical intervention should be considered.