Carbamide peroxide is also known as urea peroxide or urea hydrogen peroxide. Like any other peroxides, they are oxidizing agents which releases oxygen when in contact with water. The chemical formula is CH6N2O3, or CH4N2O.H2O2.

The carbamide peroxide is a skin, eye and respiratory irritant. It is also corrosive and causes burns. It does not cause injuries at 10% concentration but it mightÂ  at 35% concentration hence causing white chemical burns on the skin and gums alike.Â

How is it used

For the Do it yourself carbamide peroxide teeth whitening gel :

For the Professional Dentist :

Easily half of all patients who bleach their teeth notice some type of tooth sensitivity. It may take the form of thermal sensitivity which is a response to hot and cold temperature variations such as those produced by foods and beverages, sensitivity to air when a person breathes through their mouth, or simply generalized tooth discomfort. There is no way to predict if you are going to get tooth sensitivity after bleaching. However, a certain step can be taken to reduce the sensitivity. The best way is to use desensitizing toothpaste like Sensodyne 2 weeks before bleaching your teeth.

It is also possible that during the whitening process a person’s gum tissue will become irritated by either the whitener they are using or else the bleaching tray itself. Whiteners with higher carbamide peroxide concentration will logically irritate the gum tissues more.

Teeth whitening is prohibited for children, as they are young and might even swallow large amounts ofÂ  the carbaminde peroxide teeth whitening gel without anyone knowing. If at all you are not too sure or are concern about buying an over the counter teeth whitening gel, you can always visit a professional dentist to do it for you. 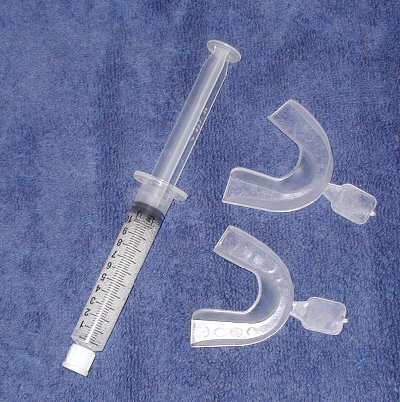 The 35 carbamide peroxide teeth whitening gel in stabilized PH formula is much stronger tooth whitening agent compared to other lower strength tooth whitening gels. Therefore, the results can quickly be seen. It does not containÂ  harmful acids or abrasives to damage your teeth or gums. Other teeth whitening products sold over-the-counter in drugstores are under 6% hydrogen peroxide and will not be as affective at whitening the teeth.