Tooth dilaceration is a developmental problem which involves the malformation of tooth either at the crown or root portion. This results in altered morphology or shape of the tooth, commonly manifest as extreme bends or curves in an otherwise straight tooth.

Cause of tooth dilaceration

The usual cause behind tooth dilaceration is trauma to the tooth while it is still forming. This causes a distortion in position of the forming tooth, resulting in the remaining part to form at an angle. The extent and point of dilaceration, whether it affects the crown or the root, is determined by the trauma induced. Example of such disturbances include blow to the face or falling over. Other more rare incidents include replantation of a knocked out or avulsed primary tooth, more commonly referred to as baby tooth. Another possible contributing factor includes orthodontics braces on a tooth with incomplete root formation. Other developmental problems or syndromes can also contribute to tooth dilacerations. A common disorder associated with dilacerated tooth is Turnerâ€™s hypoplasia. Occurrence of cyst or tumour which may cause an infection can also displace the developing tooth, causing dilacerated crown or root.

How to avoid tooth dilaceration 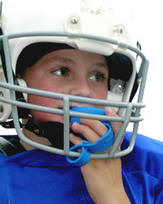 Accidents are unpredictable hence making it hard to avoid tooth dilaceration. There are some general guides which can help minimize the occurrence especially if your child is playing contact sports. It is highly recommended that they wear a mouth guard not just to prevent tooth dilaceration, but any trauma to the oral region in general. In case of trauma, the child should be assessed by a dentist as soon as possible to evaluate the condition and if any steps can be done early on to prevent future complications. It is also important to note that if a baby tooth is knocked out that in no circumstances should the avulsed tooth be replanted back to its socket. This is because the replanted baby tooth may impinge or graze the developing tooth during replantation, causing unnecessary trauma to the permanent tooth leading to shape malformations. Another risk associated with avulsed tooth includes bacteria infestation on the surface of replanted baby tooth, leading to infection that can compromise the development of the permanent tooth underneath it.

If the dilaceration involves the coronal or crown portion of the tooth, it will be easily detected from the mouth as long as the tooth is erupted. For an unerupted dilacerated tooth or dilacerations involving the root of the tooth, multiple radiographs taken at various angle might be required to look for dilacerations. Due to its asymptomatic nature, in exception to cases where it becomes infected, tooth dilacerations are often left undetected or are usually accidental findings during routine oral examination.

The site and extent of tooth dilaceration significantly affects the outcome. In a case of dilacerated crown, the tooth may appear unaesthetic due to its altered shape and hence requiring cosmetic dental treatment such as dental crowns or porcelain veneers. Where the root is dilacerated, the tooth may be impacted or fail to erupt due to the sharp curve and get lodged in the jaw. This may cause a problem in the future as the impacted tooth may turn cystic. Dilacerated tooth can sometimes erupt in an awkward position causing crowding or displacement of other teeth. Other associated risks with tooth dilaceration are pulpal death or inflammation as the angled portion of the tooth consist of slightly abnormal structure, acting as a passageway for bacteria to access the pulp.

In some cases of tooth dilaceration, it may be possible to realign the tooth by surgically exposing the tooth. This can be done with or without the help of orthodontic braces. Due to the angulation of the tooth, realignment by relying solely on orthodontic measures is usually not feasible. Dilacerated areas which are exposed to the mouth, i.e. in crown dilacerations, restorative work such as fillings or dental crowns should be carried out to prevent bacterial ingression which can lead to pulpal problems as mentioned above.

Dilacerated tooth when presented as a problem, is usually difficult to treat especially when it involves the root. Root canal treatment on dilacerated tooth is very challenging and normally requires an endodontist to complete. Extraction or removal of dilacerated tooth is complicated due to the sharp bends that acts as a hook, lodging it firmly into the jaw. It frequently breaks and requires surgical extraction to section it into fragments to ensure complete removal. When nothing is done, careful monitoring of dilacerated tooth is recommended to detect any early signs of changes.