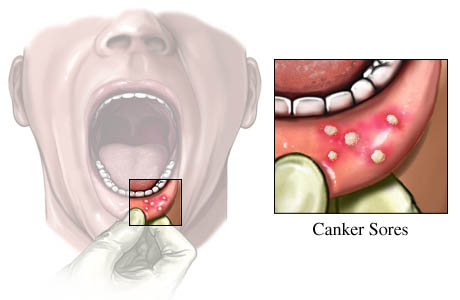 What is a canker sore

A canker sore mouth is a non traumatic ( not caused by injury to the mouth)Â  ulceration that affects oral mucosa or skin of the mouth. Another more scientific term for this is an apthous ulcer. This is probably the most common ulcers found in the mouth. The incidence of canker sores range from 20% to 60%, depending on the population studied. Prevalence or higher occurrence rate tends to be higher in professional persons, in those in upper socioeconomic groups and in those who do not smoke. This canker sores are thought to be an immunological disease.

There are three types of canker sores or ulcers that has generally been identified : minor, major and herpetiform ulcer. All of these three are believed to be part of the same disease spectrum, and are also believed to have the same cause. The differences between these three forms are essentially clinical and corresponds to the degree of canker sore pain felt by the patient. All forms present as painful recurrent ulcers. Patients usually has prodormal symptoms ( non-specific symptom (or set of symptoms) that might indicate the start of a disease before specific symptoms occur ) of tingling burning sensation in the mouth before the appearance of the canker sore. The canker sores are not preceded by vesicles and characteristically appear in the sulcus and cheek of the mouth. Canker sore on lips and canker sores tongue are also common sites for occurrence. The only areas in the mouth that this canker sores rarely occur at are the gums and hard section of our palate, this landmarks of occurrence can help us separate canker sores from secondary herpetic ulcers which may look similar to a canker sore. However, do note that for patients suffering from AIDS, canker sores can occur anywhere in the mouth. Are canker sores contagious ? Please note that canker sores are not contagious, it is an immune disease caused by the own individual’s immune reaction not by a contagious canker sore virus.

It is the most commonly encountered form of canker sores. This type typically appears as a single oval ulcer, less than 0.5 cm in diameter, it is covered by a yellow fibrinous membrane and surrounded by aÂ  erythematous halo (red colored ring). Multiple canker sores may be seen at one time in the mouth. When canker sores occur on the tongueÂ  , or canker sores tongue , canker sore pain tends to be out of proportion form the size of the lesion.This type of minor canker sores last for about 7-10 days and heal without any scar formation. You can have one to five of them in your mouth at a time. Recurrence rate varies among individuals. Periods of freedom from canker sores vary from moths , days, to years. 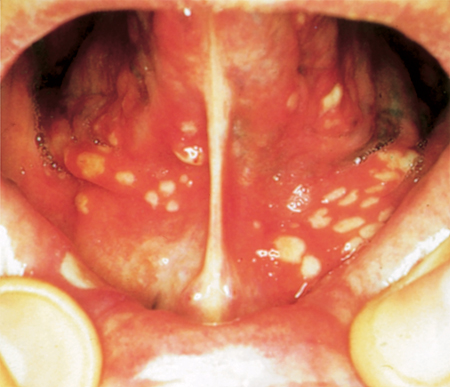 This type of canker sores presents clinically as recurrent crops of small oval shaped ulcers. It is like cluster forms of small ulcer’s looking like herpetic vesicles, but they are in no way associated with herpes viruses. Hence the name herpetiform ulcers. There can be ten to one hundred small canker sores in the mouth.Â  Although movable mucosa is predominantly affected, the palate and gums might be also a possible site for appearance of this canker sores. There might be considerable canker sore pain felt and healing generally occurs in one to two weeks. Unlike herpes infections, there are no fluid filled vesicles present and exhibit no virus infected cells.