The goal of Periodontal therapy is to halt the disease progression and prevent its recurrence, and restore the lost periodontal structure which occured as the result of the disease destruction. The later goal prompts us to evaluate the concept of â€œnew attachmentâ€ or â€œregenerationâ€, and â€œreattachmentâ€ or â€œrepairâ€. Each concepts will lead to different mode of periodontal therapy, and ultimately different result. New attachment is the ideal, desired goal, which each periodontist today are trying to achieve in every possible way. 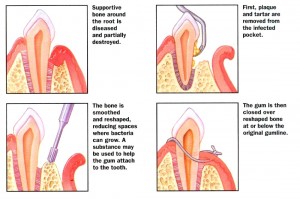 Reattachment of the soft tissues to the tooth, with or without bone regeneration, has been observed clinically as far back as 1893 by Allport and 1894 by Younger, Leonard, and ohters. Box and Beube have shown histologic confirmation of reattachment in human material. Glickman and Lazansky demonstrated that it is possible for epithelium to attach itself to a higher crownward level rather than point of incision. Linghorn and Oâ€™Connel observed reattachment of connective tissue and the formation of new bone and cementum in surgically defected in dogs. Finally, Ramfjord demonstrated reattachment histologically in pathologic pockets experimentally produced in monkey. Ramfjord showed that histologic examination reveals formation of new bone, periodontal membrane, cementum, and the epithelial reattachment at a more crownward level. 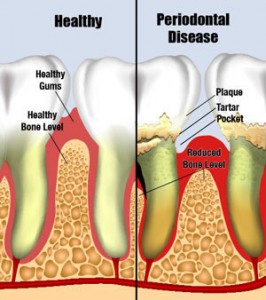 Repair, on the other hand, is the biologic process by which continuity of disrupted tissue is restored by new tissues which do not replicate the structure and function of the lost tissue. According to this definition, new attachment, or regeneration, will result in a completely new exact duplicate of the periodontal structures (periodontal ligament, alveolar bone , and cementum) which were there before the disease destruction, where as repair brings about the â€œscarâ€ tissue, with anticipated lost of function. Caranza in his book of clinical periodontology, defined regeneration as the growth and differentiation of new cells and intercellular substances to form new tissues or parts. The final endpoint of regeneration is the complete tissue restoration. In the periodontium, gingival epithelium is replaced by epithelium, and the underlying connective tissue and periodontal ligament are derived from connective tissue. Bone and cementum are replaced by connective tissue, which is the precursor of both bone and cementum. Undifferentiate connective tissue stem cells develop into osteoblasts and cementoblasts, which form bone and cementum. Regeneration occured everyday, as the process is continuous to replace mature and dead cell. This kind of regeneration also termed wear and tear repair. 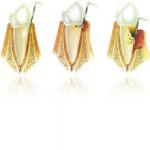 Regeneration also occured in present of disease destruction. One must keep in mind that with regeneration, there is a complete restoration of tissue and function. Caranza also defined repair as â€œhealing by scarâ€, of which disease progression is halted. There is no increase in bone height. The destroyed periodontium is replaced by mobilization of epithelial and connective tissue cells into damaged area and increase local mitotic divisions to provide the sufficient number of cell. Caranza defines new attachment as the embedding of new periodontal ligament fibers into new cementum and attachment of the gingival epithelium to a tooth surface previously denuded by disease. In the past reattachment was used to refer to the restoration of the marginal periodontium, but because it is not the existing fibers that reattach but the new fibers that are formed and attach to the new cementum, the term has been replaced by the term new attachment. Reattachment are now only used as repair in areas of the root not previously exposed to the pocket, such as after surgical detachment of the tissues or after traumatic tears in the cementum, tooth fractures, or treatment of periapical lesion. Finally, the definitions these process have been presented in the American Academy of Periodontologyâ€™s Glossary of Periodontic Terms. Repair is the healing of a wound tissue that does not fully restore the architecture or the function of the part. Regeneration is the reproduction or reconstitution of a lost or injured part. New attachment is the reunion of connective tissue with a root surface that has been deprived of its peridontal ligament. This reunion occurs by the formation of a new cementum with inserting collagen fibers. Finally, reattachment is the reunion of connective tissue with a root surface on which viable periodontal tissue is present. Not to be confused with New attachment.