HIV disease (symptomatic HIV infection) appears as the CD4 count progressively declines over a long incubation period, which may extend over 5 to 15 years or more. Then the person may develop:

AIDS is the most severe manifestations of HIV infection. Persons living with AIDS often have weight loss, diarrhea, oropharnygeal candidiasis, infections of the lungs, brain, eyes and other organs, Kaposi sarcoma and lymphoma, and AIDS dementia complex.

The prognosis of HIV / AIDS has almost invariably been poor and death virtually inevitable, although there are rare patients who show remarkable genetic resistance. Anti-retrovirals have been developed that can significantly slow the progression of HIV disease.

Oral features of HIV / AIDS reflect the T-cell immune defect and are, thus, mainly the consequence of fungal or viral infections. 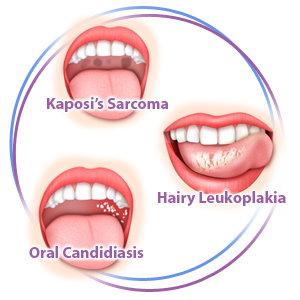 The most common are candidiasis (candidosis) and hairy leukoplakia. Necrotizing gingivitis, accelerated periodontitis, Kaposi sarcoma, lymphomas, salivary gland disease, ulcers of various infective causes and other lesions may be seen.

Oral lesions may indicate HIV infection that is previously undiagnosed, be used in staging and therapy decisions, or cause the individual pain or esthetic problems.

These oral diseases have a number of common features, namely that generally they are:

A miscellany of rare disease

Considerable compassion is required in the diagnosis of such as a catastrophic infection, since it impacts on virtually all aspects of the person’s life as well as that of their family and others, eventually resulting in unpleasant, painful and incapacitating illnesses and their treatment. There must always be appropriate counseling:

Few, if any, patients have spontaneous remission and thus treatment is almost invariably indicated, although in rare cases the disease progresses very slowly and may only at a very late stage manifest with serious complications.

Since AIDS was first recognized about 20 years ago, remarkable progress has been made in improving the quality and duration of life of HIV-infected persons. Early intervention with anti-retroviral drugs is usually beneficial. Treatment with a combination of these drugs is termed highly active antiretroviral therapy (HAART). There is some controversy as to the increase in heart disease and heart attacks, at which point therapy should be introduced and as to the importance of prophylaxis of infections. Post-exposure prophylaxis (PEP) is by short-term antiretroviral treatment to lessen the likelihood of HIV infection after potential exposure. Vaccines against HIV are still very much in their infancy.