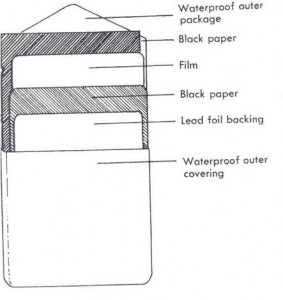 Emulsion
Silver `halide crystals namely the Silver bromide& Silver iodide are embedded in
the gelatin matrix.
A protective coating of gelatin is added over the emulsion[super coat].

The film is encased in a protective black paper wrapper & backed by a thin sheet
of lead foil.Black paper covers the film & shields the film from light.
Lead foil protect the film from secondary or scattered radiation &gives rigidity of
the packet.The films are wrapped in packets of white, pebbled,moisture-resistant
paper or polyvinyl wrap.

There is a raised dot[Embossed dot]
is seen on one corner of the
film packet,which helps to orient
the film towards the x-ray beam.

Developer Solution: It reduces all silver ions in the exposed crystals of silver bromide to metallic silver.To get a diagnostic image, the reduction process must be restricted to crystals which contain latent image.Areas that have many exposed crystals will be more dense
[ black] because of their higher concentration of black metallic silver granules after development.

Components:
1]Developerâ€“ primary function is to amplify the latent image by converting the exposed
Silver halide crystals into metallic silver grains.
Elon& Hydroquinone are commonly used.Elon is also known as metol.
ELON [Monomethy-para-aminophenol sulphate]â€”acts quickly to bring out the gray shades in an image.
HYDROQUINONE[Para hydroxy benzene]â€”brings out the contrast of the image.
2]Preservativeâ€”Sodium sulphite which is an antioxidant is used.
A] It helps to protect the developer from being oxidized by atmospheric oxygen.
B] It helps to extend the useful life of the Hydroqunone & Elon.

3]Accelerator[Activator]:The alkali sodium carbonate is used.The
developing agents are active only in an alkaline {high pH} environment.
Activators help to soften the gelatin,so that the developer agents diffuse
more rapidly into the emulsion & reach the silver bromide crystals more
effectively.Sodium Hydroxide,Sodium metaborate & tetraborate are also used.
4]Restrainer:Potassium bromide is used.
It helps to control the developer & to prevent it from developing the
exposed and unexposed silver halide crystals.It is more effective in
depressing the reduction of unexposed crystals, there by acts as an antifog agent.
Developer replenisher:It is a solution made for topping off the developing solution each morning. It is a more concentrated solution of developer added to replace those depleted from the original solution,without increasing the volume.
Rinsing: The film is washed for 15-20 seconds before being placed in the fixer. This helps to remove the alkali activator.

Fixer Solution
Primary function of fixing solution is
1] To remove {dissolve} the undeveloped silver halide crystals from the emulsion.
2] To harden{fix} the film emulsion.
If the unexposed crystals are not removed , the image on the
radiograph is dark & nondiagnostic.
Presence of unexposed crystals causes film to be opaque.
Basic Ingredients:
1] Clearing agents-[Fixing agents].
2] Preservative.
3] Acidifier.
4] Hardener.

Fixing Agent
1]Clearing agent:The film emulsion has to be cleared by dissolving & removing the unexposed silver halide crystals.Sodium or Ammonium thiosulfate is commonly used. This chemical clears the film so that the black image produced by the developer becomes readily distinguished.
2]Preservative: Sodium sulfite is used.Action is to prevent chemical deterioration/ decomposition of the fixing agent.
3]Acidifier: Acetic acid or sulfuric acid is used.Function is to neutralize any contaminating alkali from the developing solution& to inhibit any carryover of the developing agents.Unexposed crystals may continue to develop in the fixing tank due to un-neutralized alkali & un-inhibited developing agents from the developing solution.
4]Hardener: It prevent damage to the gelatin by subsequent handling. Helps to shorten the drying time. The agents used are potassium alum. Aluminium potassium sulfate & chromium potassium sulfate are also used.
Washing: After fixing the film is washed in tap water for adequate time to assure removal of all processing chemicals.