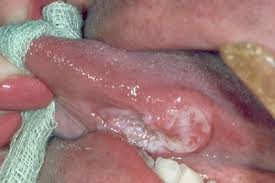 An example of an oral cancer-squamous cell carcinoma

Oral or mouth cancers are any tumours that grows anywhere in the mouth. They are often associated with tobacco use. It is a condition of concern because some oral cancers are fatal if not detected and treated early, such as squamous cell carcinoma (SCC), which is due to uncontrolled proliferation of the squamous cells. Almost all oral cancers begin in the flat cells (squamous cell) that cover the surfaces of the mouth, tongue, and lips.

-Squamous cell papilloma: usually single, cauliflower-like growths, can be present on any surface of the mouth

-verruca vulgaris/ common wart: commonly seen in children, can be transmitted from warts on fingers or lips

-veneral wart: usually seen in anogenital areas, but can be found in the oral region if oral sex is practised

-Squamous cell carcinoma: most common of all malignant oral cancers (about 90% of cases)

-Basal cell carcinoma: a common tumour on the skin of the face, due to long exposure to UV radiation.

How does tumour form?

Cell growth is regulated by genes:

In health, cellular production and destruction is controlled by a balance between these 2 genes. When there is mutation or deregulation of these genes, this balance is destroyed, resulting in abnormal proliferation of cells or decreased destruction of cells with damaged DNA, forming a tumour.

6. Ultraviolet light/long term exposure to the sun-on the lip only 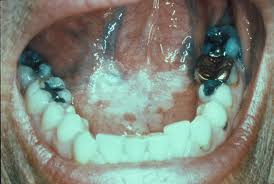 Signs and symptoms which may suggest oral cancers

The purpose of grading and staging is so that there can be a standardized way of classification of tumours between different countries all over the world when communicating the severity of a tumour. It also helps the physician determine the treatment and the prognosis of the patient.

Staging is done clinically, and uses the TNM system:

The tumour is staged according to the following criteria:

A precancerous lesion is defined as a morphologically altered tissue in which cancer is likely to occur than its normal counterpart. The lesion itself undergoes malignant transformation

A precancerous condition is a generalized disorder associated with a significantly increased risk of cancer development some where in the mouth.

Lichen planus is a precancerous condition

Eg: -Oral submucous fibrosis (5-8% chance of occurance of tumour in the mouth)

-Conditions associated with epithelial atrophy such as Sideropenic dysphagia