Bell’s palsy is a form of facial paralysis resulting from a dysfunction of the cranial nerve VII (the facial nerve) that results in the inability to control facial muscles on the affected side. Several conditions can cause facial paralysis, e.g., brain tumor, stroke, and Lyme disease. However, if no specific cause can be identified, the condition is known as Bell’s palsy. Named after Scottish anatomist Charles Bell, who first described it, Bell’s palsy is the most common acute mononeuropathy (disease involving only one nerve) and is the most common cause of acute facial nerve paralysis. 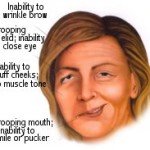 Bell’s palsy is defined as an idiopathic unilateral facial nerve paralysis, usually self-limiting. The hallmark of this condition is a rapid onset of partial or complete palsy that often occurs overnight. In rare cases (1%), it can occur bilaterally resulting in total facial paralysis.

It is thought that an inflammatory condition leads to swelling of the facial nerve. The nerve travels through the skull in a narrow bone canal beneath the ear. Nerve swelling and compression in the narrow bone canal are thought to lead to nerve inhibition, damage or death. No readily identifiable cause for Bell’s palsy has been found.

Corticosteroids have been found to improve outcomes while anti-viral drugs have not. Early treatment is necessary for steroids to be effective. Most people recover spontaneously and achieve near-normal to normal functions. Many show signs of improvement as early as 10 days after the onset, even without treatment.

Often the eye in the affected side cannot be closed. The eye must be protected from drying up, or the cornea may be permanently damaged resulting in impaired vision. In some cases denture wearers experience some discomfort.

Bell’s palsy is characterized by facial drooping on the affected half, due to malfunction of the facial nerve (VII cranial nerve), which controls the muscles of the face. Facial palsy is typified by inability to control movement in the facial muscles. The paralysis is of the infranuclear/lower motor neuron type.

The facial nerves control a number of functions, such as blinking and closing the eyes, smiling, frowning, lacrimation, salivation, flaring nostrils and raising eyebrows. They also innervate the stapedial (stapes) muscles of the middle ear and carry taste sensations from the anterior two-thirds of the tongue.

Clinicians should determine whether the forehead muscles are spared. Due to an anatomical peculiarity, forehead muscles receive innervation from both sides of the brain. The forehead can therefore still be wrinkled by a patient whose facial palsy is caused by a problem in one of the hemispheres of the brain (central facial palsy). If the problem resides in the facial nerve itself (peripheral palsy) all nerve signals are lost on the ipsilateral (same side of the lesion) half side of the face, including to the forehead (contralateral forehead still wrinkles).

One disease that may be difficult to exclude in the differential diagnosis is involvement of the facial nerve in infections with the herpes zoster virus. The major differences in this condition are the presence of small blisters, or vesicles, on the external ear and hearing disturbances, but these findings may occasionally be lacking (zoster sine herpete). Reactivation of existing herpes zoster infection leading to facial paralysis in a Bell’s palsy type pattern is known as Ramsay Hunt syndrome type 2.

Lyme disease may produce the typical palsy, and may be easily diagnosed by looking for Lyme-specific antibodies in the blood or erythema migrans. In endemic areas Lyme disease may be the most common cause of facial palsy.

The degree of nerve damage can be assessed using the House-Brackmann score.

Because both the nerve to Stapedius and the chorda tympani nerve (taste) are branches of the facial nerve, patients with Bell’s palsy may present with hyperacusis or loss of taste sensation in the anterior 2/3 of the tongue.

Although defined as a mononeuritis (involving only one nerve), patients diagnosed with Bell’s palsy may have “myriad neurological symptoms” including “facial tingling, moderate or severe headache/neck pain, memory problems, balance problems, ipsilateral limb paresthesias, ipsilateral limb weakness, and a sense of clumsiness” that are “unexplained by facial nerve dysfunction”.This is yet an enigmatic facet of this condition.

Some viruses are thought to establish a persistent (or latent) infection without symptoms, e.g., the varicella-zoster virus and Epstein-Barr viruses, both of the herpes family. Reactivation of an existing (dormant) viral infection has been suggestedas cause behind the acute Bell’s palsy. Studies suggest that this new activation could be preceded by trauma, environmental factors, and metabolic or emotional disorders, thus suggesting that stress – emotional stress, environmental stress (e.g., cold), physical stress (e.g., trauma) – in short, a host of different conditions, may trigger reactivation.