To most people the term sugar refers to the common household foodstuff table sugar (sucrose). Yet sucrose is only one of many naturally occurring sugars used in the human diet. Technically the term sugar applies to two classifications of carbohydrates. Free-form monosaccharides (simple sugars) include the more common glucose, fructose, and galactose. Disaccharides (two simple sugar molecules linked together) include the most common sucrose, lactose, and maltose. Naturally occurring sugars are available in fruits, vegetables, grains and dairy foods. Sweeteners are added sugars that are used as ingredients to both satisfy our taste and in some cases provide added energy.

There is increasing interest in the use of sweetening agents in the United States with wide-scale acceptance of sugar substitutes such as NutraSweet, Sweet’n Low, and Splenda, which provide sweetness but are safer for teeth. They are useful because many people have a sweet tooth and thus they will have dental benefits when sugar substitutes are used to replace sugars in foods that are frequently consumed, such as sweet snacks, drinks and liquid medicines.

Sweeteners products may be divided into two categories: those which have no calorific value (non-nutritive or intense sweeteners) and those which have a calorific value (nutritive or bulk sweeteners). The list of non-sugar sweeteners below should be useful when helping an individual to examine food labels to see if the constituents are able to cause teeth cavities. The bulk sweeteners can cause osmotic diarrhea if consumed in large amounts and are therefore not indicated for small children. However it is probably wise to avoid all artificial sweeteners in pre-school children.

These are sometimes called intense sweeteners because they have sweetness many times that of sucrose. These substances impart sweetness but supply no calories. They are safe for teeth because they cannot act as an energy source for dental plaque microorganisms and acid cannot be derived from them.

The three non-nutritive sweeteners readily available in the market are saccharin, acesulfame-K and aspartame. They are produced in both tablet and granule form, but the granule form is best avoided because the bulking agent is maltodextrin, which may be produce cavities in teeth. Saccharin was discovered more than a century ago and has been used as a sweetener in foods and drinks for over 80 years. It is 300 times as sweet as sugar weight for weight but suffers the disadvantage of a bitter, metallic aftertaste which some consumers find unacceptable.

Acesulfame-K is chemically related to saccharin but has an improved aftertaste. Aspartame (trade names Canderel, NutraSweet) is a slightly different product containing two amino acids. Its taste is regarded as the closest to that of sucrose, with no bitterness.

These artificial sweeteners are also used in the manufacture of several drinks and substitution of the artificially sweetened beverage may be helpful from a cavity point of view. However, it must be remembered that such drinks, although do not initiate dental cavities, are very acidic and may cause erosion if consumed frequently.

The nutritive sweeteners are sugar alcohols and the most useful are sorbitol and xylitol. Other polyols used as bulk sweeteners in confectionery products are lycasin, malititol and mannitol. Sorbitol is found naturally in some fruits and berries but for economic reasons, both sorbitol and mannitol are prepared industrially from glucose. Sorbitol is only about half as sweet as sucrose and relatively inexpensive. It is used in chewing gum, sugar-free sweets, â€˜diabeticâ€™ food products, sugar-free medicines and toothpaste. Since it is only partially absorbed from the bowel, large amounts produce a laxative effect because of the osmotic transfer of water into the bowel. Sorbitol is fermented by some plaque microorganisms but at a much slower rate than sucrose. However, it is regarded as much less dental decaying than sucrose. Drinks, sweets and chewing gum containing sorbitol are likely to be safer for teeth than their sucrose-containing counterparts. 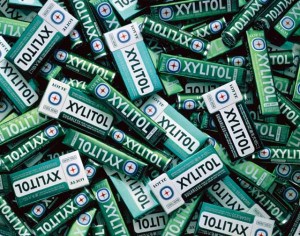 Xylitol is a sugar alcohol obtained commercially from birch trees, coconut shells and cotton seed hulls. It is twice as expensive to produce as sorbitol and ten times the cost of sucrose. Like sorbitol it has a laxative effect, but unlike sorbitol it cannot be fermented by microorganisms in the mouth. Xylitol may even have anti-dental cavity effect. Chewing gum stimulates salivary flow and xylitol reduces the levels of mutans streptococci (the bacteria that cause tooth cavities) in the mouth. This makes it a very attractive agent to put in chewing gum as a sweetening agent where chewing may encourage salivary flow and xylitol reduce the cavity producing bacteria.

Isomalt (Palatinit) is a mixture of two disaccharide alcohols and is said to be particularly useful in the manufacture of sugar-free chocolate.