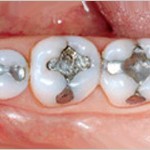 Mercury dental filling, or best known as dental amalgam is an alloy of silver, tin, mercury, and copper as it’s constituent. The term amalgam is also used as a synonym by the dental profession. Among all, silver and tin have the highest composition within an amalgam.

The use of mercury in the oral environment has raised concerns regarding safety. Currently, several countries have banned the use of dental amalgam because of environment concerns, as well as alleged side effects that may be sustained by patients who receive dental amalgam restorations.

So, what is Dental Amalgam?

As i mentioned earlier, Dental amalgam is an alloy/metal of silver, tin, mercury, and copper as it’s constituent. It has been use in dentistry for more than 170 years and it is still commonly used today because it is still the cheapest filling materials available in the market that provide a significant strength. It is silver in color and it is used mainly for restorations of large posteriors teeth, cores for crown or fixed partial denture restorations etc. It is contraindicated for anterior teeth restorations as it is esthetically unpleasant.

Why is mercury used in dental amalgam?

Mercury is used because it make the dental amalgam pliable. When it is mixed with an alloy powder, it creates a compound that is soft enough to mix and condense into the tooth. But it also hardens quickly and can withstand the forces of chewing and biting.

How safe is mercury used in dental amalgam?

Mercury occurs in three forms : as the metal, as an inorganic ion, or in one of several organic forms, such as methyl or ethyl mercury. Metallic mercury gains access into the body via skin and lungs. Ingested metallic mercury is poorly absorbed by the guts, so primary portal into the body is through inhalation. Numerous studies have shown that mercury vapor is released from amalgam daily and enter into the blood stream via alveoli of the lungs. Mercury also get ingested through wear of amalgam restorations. But studies have shown that absorption of ionic mercury or mercury that is trapped within an amalgam is very poor. Furthermore, the most toxic mercury, methyl mercury, is only found in the diet, with fish (especially shark, swordfish and tuna) contributing a significant portion, is not found in amalgams.

Research by the American Dental Association (ADA) in the United States have clearly demonstrated that no signs of mercury toxicity have been linked to dental amalgams. In its advisory opinion to Rule 5.A. of the ADA Code of Ethics, it has also held that, “the removal of amalgam restorations from the non-allergic patient for the alleged purpose of removing toxic substances from the body, when such treatment is performed solely at the recommendation or suggestion of the dentist, is improper and unethical”

Besides that, several studies have estimated the number of amalgam restorations on teeth surfaces that would be needed to exposed an individual to mercury poisoning. Estimates are that 450 to 530 surfaces need to be filled with amalgam then only can achieve the levels that causes mercury poisoning. Even if all 32 teeth were restored on all surfaces with amalgam, the total number of surfaces would be only 192.

Side effects of mercury

Allergy. Typically, allergies responses represent an antigen-antibody reaction marked by itching, rashes, sneezing, difficulty in breathing, swelling, etc. Contact dermatitis is the most likely side effect of dental amalgam, but these reactions are experienced by less than 1% of the treated population. A small percentage of people are allergic to mercury, just as certain number of people are allergic to other elements. Like what i have mentioned earlier, mercury in dental amalgam cause little or no reaction to a person’s general health.

Are amalgam restorations safe during pregnancy?

Research has not shown any health effects from amalgam restorations in pregnant women. However, mercury vapor readily crosses the placenta and accumulates in the fetus as a result of mercury’s high lipid solubility. It is not clear if mercury released by dental amalgams remains entirely in the inorganic form after exposure. Some countries have guidelines to limit the intake of organic mercury. For instance, the US Food and Drug Administration reports that pregnant women should not consume more than 0.01 Î¼g of methyl mercury per kilogram per day (approximately two cans of tuna).

It is also advisable that pregnant women should avoid any unnecessary dental care. If restorations are really needed, do remind your dentist to fill it with filling materials other than amalgams. 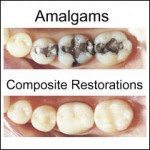 Alternatives include composite resin (or “white”) fillings, gold, porcelain, and glass ionomers can be used to replace dental amalgams. Composite resin is gaining its popularity over amalgam because it is tooth colored, have demonstrated durability on par with amalgam, and more tooth structures can be preserved to produce a conservative restoration.