In Anatomy, the Curve of Spee (called also von Spee’s curve or Spee’s curvature) is defined as the curvature of the mandibular occlusal plane beginning at the tip of the lower cuspid and following the buccal cusps of the posterior teeth, continuing to the terminal molar. According to another definition Curve of Spee is an anatomic curvature of the occlusal alignment of teeth, beginning at the tip of the lower canine, following the buccal cusps of the natural premolars and molars, and continuing to the anterior border of the ramus. Ferdinand Graf von Spee, German embryologist, (1855â€“1937) was first to describe anatomic relations of human teeth in the sagittal plane. 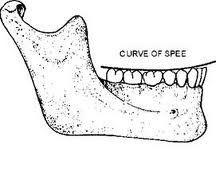 The pull of the main muscle of mastication, the masseter, is at a perpendicular angle with the curve of Spee to adapt for favorable loading of force on the teeth.

The Curve of Spee is, essentially, a series of slipped contact points. It is of importance to orthodontists as it may contribute to an increased overbite. Larry Andrews, in his important paper: Six Keys to Normal Occlusion (1972), stated that a flat or mild curve of Spee was essential to an ideal occlusion.

The curve of Spee should not be confused with the curve of Wilson, which is the upward (i.e. â€œUâ€ shaped) curvature of the maxillary and mandibular occlusal planes in the coronal plane. 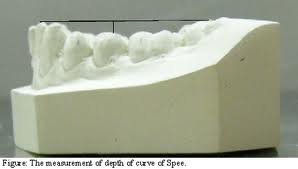 In this study the gender of the subjects had no significant effect on the variables assessed which confirms previous reports of the absence of sexual dimorphism in the curve of Spee in class I, II and III malocclusions.