Denture base extension:
a) The labial and buccal extension:

Examination of the extension

Insert of the upper trial denture in its place with light pressure on the occlusal surface, move the check in functional movement. Release of the pressure, the denture will falls down. Need adjustment till little or no movement occurs.

Retention:
It is noted that the retention of the trial denture is less than that of completed denture, due to: 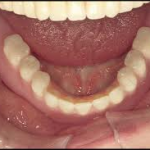 Trial dentures in the mouth

How to test the retention of the upper denture?

Stability:
It is tested by applying pressure in a tissue ward direction with the ball of the index finger in the premolar and molar regions on each side alternately. This pressure must be directed at right angles to the occlusal surface where displacement does occur.

Orientation of the anterior end of the occlusal plane is determined by esthetics.