The odontogenic myxoma is an uncommon benign odontogenic tumor arising from embryonic connective tissue associated with tooth formation. As a myxoma, this tumor consists mainly of spindle shaped cells and scattered collagen fibers distributed through a loose, mucoid material. 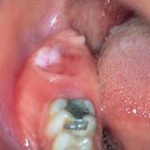 Expansion of buccal and lingual plate

(1) facial bone derived, which had been sub divided in the past into true osteogenic myxoma and odontogenic myxoma

Odontogenic myxomas have been found in patients ranging in age between 10 and 50 years, however, they are most commonly diagnosed in young adults (specifically between 25 and 35 years of age). The mandible is more likely to be affected than the maxilla. The region between the molar and premolar is the site of most common occurrence for multilocular lesions while the anterior portion of the mouth favors a smaller, unilocular variety.

Patients afflicted with an odontogenic myxoma generally notice a painless, slowly enlarging expansion of the jaw with possible tooth loosening or displacement. As the tumor expands, it frequently infiltrates adjacent structures. Maxillary lesions frequently enter the sinuses and at times (though rarely) cross the midline to the opposing sinus, while mandibular tumors often extend into the ramus. Growth may be rapid and infiltration of neighboring soft tissue structure may occur. Both the buccal and the lingual cortical plates of the mandible may expand occasionally. 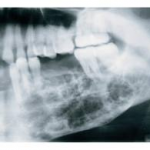 Radiographically, multilocular radiolucencies can be seen

Radiographically, odontogenic myxomas appear most commonly as multilocular radiolucencies with an ill-defined boarders, though unilocular cyst-like tumors occur, especially when associated with impacted teeth or when discovered in childhood. Ideally, the septa that cause the multilocular feature are thin and straight, producing a tennis racket or stepladder pattern. In reality, the majority of the septa visible in the tumor are curved and coarse, causing a “soap bubble” or “honeycomb” appearance, though locating one or two straight septa can aide in the diagnosis of this tumor.

Computed tomographic images of odontogenic myxomas may show any of the following features:

Gross pathology of myxoma specimens from the jaws usually showed a whitish-grey glistening or gelatinous mass with minimal true encapsulation. Histologically, all odontogenic myxomas were mainly composed of spindled or stellate-shaped cells in a mucoid-rich intercellular matrix, but histologic variations in different tumors or areas did exist. A search was made for the following characteristics: 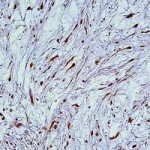 The majority of the tumors was monotonous and hypocellular with a preponderance of spindled or stellate-shaped cells. Cytoplasmic processes were often long and anastomosed with other cell processes. Nuclei were usually small, inconspicuous, and hyperchromatic. Although binucleated cells were present, mitosis and multinucleation were uncommon. There was little evidence of encapsulation in the present series and the margins were ill defined with increased osteoclastic activity in the peripheral bone. Sparsely scattered residual bony trabeculae were frequently observed. Vascularity was minimal and inconspicuous with tumors exhibiting a marked increase of blood vessels. Also infrequent were lobulation and nests of odontogenic epithelium. In most cases, increased fibers showed a very loose arrangement or could be seen only in the periphery of the tumor or the tumor nodules. Tumors containing noticeable fibrous component and/or thick collagenous bands were evident. The mucoid-rich extracellular matrix showed positive staining for Alcian blue and periodic acidâ€“Schiff. Immunostaining of the tumor cells showed uniform positivity with vimentin and patchy staining with smooth muscle actin. Cells were negative for desmin, neuron-specific enolase, glial fibrillary acid protein, and S100. Keratins (both pankeratin and CK19) was consistently expressed by the epithelial nests in the myxomas in which epithelium was present

Small unilocular lesions have been successfully treated with enucleation and curettage followed by chemical bone cautery. Multilocular tumors exhibit a 25% recurrence rate and, therefore, must be treated more aggressively. In the case of a multilocular myxoma, resection of the tumor with a generous portion of surrounding bone is required. When associated with teeth, their removal is necessary.

Because of the gelatinous nature of the tumor, it is crucial for the surgeon to remove the lesion intact so as to further reduce the risk of recurrence. Conservative treatment was justified in cases considering the age of the patient, absence of bony expansion and negative involvement of the maxillary sinus. But the patient is to be followed up regularly and no signs of recurrence have to be observed for at least 4 months.