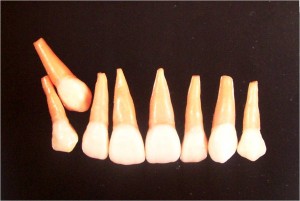 Why do maxillary canines are frequently impacted?
Etiologic factors
A summary of Dewelâ€™s discussion of these factors follows â€“
The hard palatal bone offers more resistance than does alveolar bone on the ridge to the eruption of the cuspid that is misplaced lingually.
The greater the distance the tooth must travel from its point of development to normal occlusion, the greater the possibility of deflection from its normal course and of its resultant impaction. 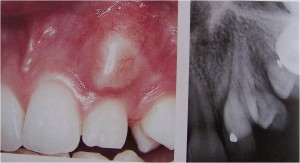 â€œClinical palpation of the buccal surface of the alveolar process distal to the lateral incisor may reveal the position of the maxillary canine about 1 to 1Â½ years before emergence and this has been suggested as a diagnostic toolâ€.

Upper : Distal tipping of a lateral incisor due to the erupting canine

Lower : Follow-up â€“ Straightening of the teeth after canine eruption

When should we suspect canine impaction? 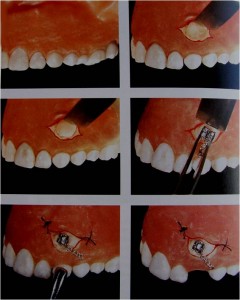 Removal of bone and follicle 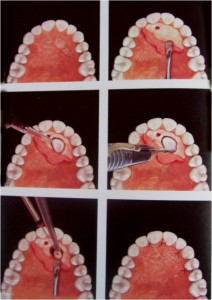 Transplantation of maxillary canine with labial position.
Exposure of the crown
Preparation of a new socket
Splinting

What will happen if we leave a supernumerary tooth?
Either eruption / impaction?
Periodontitis
Spontaneous resorption (freq 8%)
Migration
Follicular/dentigerous cyst (2% to 9%)

Warnings for disturbance in eruption of anterior permanent teeth 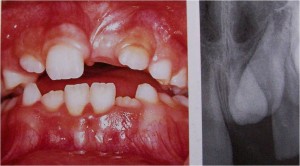 The Impacted Tooth in Patients with Alveolar Clefts

The Impacted Tooth in Patients with Alveolar Clefts
Tooth impaction is a relatively common problem in individual with clefts of the lip and palate.
Impactions are not confined to the site of cleft.
Canine impactions to be 10 times more frequent in clefts than in non cleft individuals.
Striking anomalies of dental development are found in the maxillary lateral incisor region where the alveolar cleft occurs.
Lateral incisor being the most affected.

Surgical Considerations for impacted tooth in the region of elective osteotomiesThere seems to be a dichotomy of opinion whether to remove impacted teeth prior to the orthognathic surgery or at the actual time of surgery.
The following points address this issue and systematically outlines practical and biologically sound methods of managing impacted teeth in the path of planned osteotomies.