In the past method of sterilizing endodontic files was the use of glass bead or salt sterilizer. These sterilizer often need extensive warm-up times and periodic calibration.

Â Flaming Â is done to loops and straight-wires in microbiology labs. Leaving the loop in the flame of a Bunsen burner or alcohol lamp until it glows red ensures that any infectious agent gets inactivated. This is commonly used for small metal or glass objects, but not for large objects (see Incineration below). However, during the initial heating infectious material may be “sprayed” from the wire surface before it is killed, contaminating nearby surfaces and objects. Therefore, special heaters have been developed that surround the inoculating loop with a heated cage, ensuring that such sprayed material does not further contaminate the area. Another problem is that gas flames may leave residues on the object, e.g. carbon, if the object is not heated enough.

A variation on flaming is to dip the object in 70% ethanol (or a higher concentration) and merely touch the object briefly to the Bunsen burner flame, but not hold it in the gas flame. The ethanol will ignite and burn off in a few seconds. 70% ethanol kills many, but not all, bacteria and viruses, and has the advantage that it leaves less residue than a gas flame. This method works well for the glass “hockey stick”-shaped bacteria spreaders.

The extreme penetrability of the ethylene oxide (ETO) molecule and ETOâ€™s effectiveness at low temperature (700 to 1400 F; 210 to 600 C) make ETO ideal for sterilizing heat sensitive materials. Even thought ETO seems ideal for some dental instruments, such as hand pieces, it is best used in a hospital or strictly controlled environment. ETO is thought to be potentially mutagenic and carcinogenic, and its use must be weighed against its possible benefits.
Ethylene oxide (EO or EtO) gas is commonly used to sterilize objects sensitive to temperatures greater than 60 Â°C and / or radiation such as plastics, optics and electrics. Ethylene oxide treatment is generally carried out between 30 Â°C and 60 Â°C with relative humidity above 30% and a gas concentration between 200 and 800 mg/l, and typically lasts for at least three hours. Ethylene oxide penetrates well, moving through paper, cloth, and some plastic films and is highly effective. EtO can kill all known viruses, bacteria and fungi, including bacterial spores and is compatible with most materials (e.g. of medical devices), even when repeatedly applied. However, it is highly flammable, toxic and carcinogenic.

The two most important ethylene oxide sterilization methods are: (1) the gas chamber method and (2) the micro-dose method. To benefit from economies of scale, EtO has traditionally been delivered by flooding a large chamber with a combination of EtO and other gases used as dilutants (usually CFCs or carbon dioxide). This method has drawbacks inherent to the use of large amounts of sterilant being released into a large space, including air contamination produced by CFCs and/or large amounts of EtO residuals, flammability and storage issues calling for special handling and storage, operator exposure risk and training costs.

Ethylene oxide is still widely used by medical device manufacturers for larger scale sterilization (e.g. by the pallet), but while still used, EtO is becoming less popular in hospitals. Since EtO is explosive from its lower explosive limit of 3% all the way to 100%, EtO was traditionally supplied with an inert carrier gas such as a CFC or halogenated hydrocarbon. The use of CFCs as the carrier gas was banned because of concerns of ozone depletion [12] and halogenated hydrocarbons are being replaced by so-called 100% EtO systems because of the much greater cost of the blends. In hospitals, most EtO sterilizers use single use cartridges (e.g. 3M’s Steri-Vac line,[13] or Steris Corporation’s Stericert sterilizers[14]) because of the convenience and ease of use compared to the former plumbed gas cylinders of EtO blends. Another 100% method is the so-called micro-dose sterilization method, developed in the late 1950s, using a specially designed bag to eliminate the need to flood a larger chamber with EtO. This method is also known as gas diffusion sterilization, or bag sterilization. This method minimizes the use of gas.[15]

Another reason for the decrease in use of EtO are the well known health effects. In addition to being a primary irritant, EtO is now classified by the IARC as a known human carcinogen.[16] The US OSHA has set the permissible exposure limit (PEL) at 1 ppm calculated as an eight hour time weighted average (TWA) [29 CFR 1910.1047] and 5 ppm as a 15 minute TWA. The NIOSH Immediately dangerous to life and health limit for EtO is 800 ppm.[17] The odor threshold is around 500 ppm[18] and so EtO is imperceptible until concentrations well above the OSHA PEL. Therefore, OSHA recommends that some kind of continuous gas monitoring system be used to protect workers using EtO for sterilization.[19] While the hazards of EtO are generally well known, it should be noted that all chemical sterilants are designed to kill a broad spectrum of organisms, by exposing them to high concentrations of reactive chemicals. Therefore, it is no surprise that all the common chemical gas sterilants are toxic and adequate protective measures must be taken to protect workers using these materials. 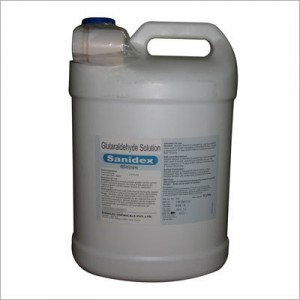 Glutaraldehyde solutions require long immersion time.
Glutaraldehyde solutions have some odor, which may be objectionable, especially if the solutions are heated.
Sterilization is nonverifiable.
Glutaraldehyde solutions are irritating to mucous membranes (e.g., eyes)
Handpiece Sterilization
Dental handpieces and related instruments should be sterilized between each patient to help prevent cross-infection. Continued improvement in handpiece design has made repeated sterilization of dental handpiece possible. To reduce problems related to sterilization such as loss of torque, turbine wear, and fiber-optic degradation, the manufacturer’s instructions should be strictly followed. Although all handpieces can be sterilized, the use of steam under pressure, unsaturated chemical vapor, prolonged dry heat, or rapid dry heat can affect various hand-pieces differently.

Process indicators:
Are usually strips, tape, or paper products marked with special ink that changes color with exposure to heat, steam, or chemical vapor. The ink changes color when the item being processed have been subjected to Sterilizing conditions.
Biologic indicators:
Are usually preparations of nonpathogenic bacterial spores that serve as a challenge to a specific method of sterilization. If a sterilization method destroys spore forms that are highly resistant to that method, it is logical to assume that all other life forms, including viruses, have also destroyed.