Macrodontia is derived from the word â€œmacroâ€ which means large and â€œdontâ€ which refers to tooth or teeth. Macrodontia means a condition whereby a tooth or a group of teeth is abnormally larger than usual. We are not talking about the “bunny teeth” that weÂ  had when we were about 6-7 years old, when our 2 upper front teeth has just erupted. The head and jaws of a child that age will continue to grow, and soon the 2 front teeth will no longer seem protruding and large.

Macrodontia can be divided into:

This is a condition where the jaws/head of a person is of normal size, but all the teeth are abnormally large. It is a rare condition, and can occasionally be seen in people with pituitary giantism, or excess growth hormones.

This is a condition where the the teeth are normal sized, but the jaws are small, hence the teeth are generally relatively larger in comparison. This is a result of inheritance from 2 parents, where the size of teeth can be inherited from one parent, while the size of the jaw is inherited from the other parent. Hence it is not uncommon for parents who each has straight, even teeth, to give birth to children who have crooked teeth.

Macrodontia can also affect only a single tooth, though it is rather uncommonly seen. 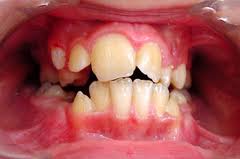 iv) Localized macrodontia affecting one side of the arch

Large teeth affecting only one side of the arch (either right or left side) can be seen in patients with facial hemihypertrophy, which is enlargement of one side of the face, with associated enlarged teeth on the involved side.

Having a single large tooth or an entire dentition of large teeth can be an unpleasant sight.

2.Â  Lack of space of eruption

Having large teeth in a normal or relatively smaller jaw will result in lack of space of eruption, leading to problems of crowding, impaction, and even cyst formation in unerupted teeth

Stripping can be done on affected tooth, removing about 0.5mm from each side of a tooth.Â  The dental practitioner may also trim the entire tooth almost like he would in preparation of a tooth receiving a crown, with the aim of maintaining the anatomical form of the tooth. However, he should practice caution not to remove too much tooth substance to avoid the risk of exposing pulp.

Teeth that are crowded or crooked can first be stripped to create space, or have some tooth extracted, followed by orthodontic appliances to straighten the teeth.

If a lot of tooth substance is required, the patient can opt for root canal treatment (RCT) and then placement of a crown or veneer.

â€œMicroâ€ means small, hence microdontia is a condition in which a tooth or a group of teeth is abnormally smaller than usual.

This condition can also be divided into:

This is when all teeth are smaller than normal. It is very rare, but can be seen in pituitary dwarfism.

When an individual inherits the jaw size from one parent(large jaw) and the teeth size from the other parent (small teeth), the teeth appear relatively small. 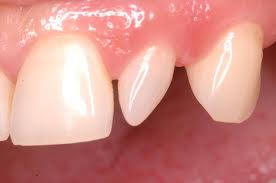 This is the most common form of microdontia, whereby only a single tooth is affected. This can be seen in supernumerary tooth like mesiodens, cleft lip and palate ( small conical shaped teeth can sometimes be seen on each side of the cleft in the tooth-bearing region), can peg laterals (upper lateral incisors that are smaller and shaped like pegs, hence the name)

This is not a major problem, but with generalized small teeth, one would not be able to chew on tough food.

If the person can accept the appearance and the disadvantage in ability to chew tougher foods, no treatment is necessary. After all, small teeth is better than no teeth!

For single small teeth, a crown can be placed on it. It may be harder to prepare such a small tooth, but only minimum preparation is necessary if there is already sufficient space around it for the crown. In generalized microdontia, the patient can opt for full mouth crownings.

Another option is to push the teeth together, and placing fake teeth in the resultant space that is created. This is rather unstable and has a high chance of relapse, hence this option is not commonly recommended.