Gardner syndrome which was ï¬rst described in 1953 consists of adenomatous polyps of the gastrointestinal tract, desmoid tumours, osteomas, epidermoid cysts, lipomas, dental abnormalities and periampullary carcinomas.The incidence of the syndrome is 1:14,025 with an equal sex distribution. It is determined by the autosomal dominant familial polyposis coli gene (APC) on chromosome 5. 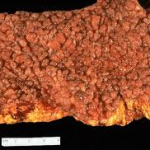 Gardner syndrome, also known as familial colorectal polyposis, is an autosomal dominant form of polyposis characterized by the presence of multiple polyps in the colon together with tumors outside the colon. The extracolonic tumors may include osteomas of the skull, thyroid cancer, epidermoid cysts, fibromas and sebaceous cysts, as well as the occurrence of desmoid tumors in approximately 15% of affected individuals. The countless polyps in the colon predispose to the development of colon cancer; if the colon is not removed, the chance of colon cancer is considered to be very significant. Polyps may also grow in the stomach, duodenum, spleen, kidneys, liver, mesentery and small bowel. In a small number of cases, polyps have also appeared in the cerebellum. Cancers related to GS commonly appear in the thyroid, liver and kidneys.

At this time, there is no cure, and in its more advanced forms, it is considered a terminal diagnosis with a life expectancy of 35â€“45 years; treatments are surgery and palliative care, although some chemotherapy has been tried with limited success.

Gardner syndrome is inherited in an autosomal dominant manner. Typically, one parent has Gardner syndrome. Each of their children, male and female alike, are at 50% risk of inheriting the gene for Gardner syndrome. The risk increases in each succeeding generation, as affected occurs (cluster studies appear by registry).

Gardner syndrome is now known to be caused by mutation in the APC gene located in chromosome 5q21 (band q21 on chromosome 5). This is the same gene as is mutant in familial adenomatous polyposis (FAP), a more common disease that also predisposes to colon cancer. New genetic and molecular information has caused some genetic disorders to be split into multiple entities while other genetic disorders merge into one condition. After existing for most of the second half of the 20th century, Gardner syndrome has vanished as a separate entity. It has been merged into familial adenomatous polyposis (FAP) and is now considered simply a phenotypic variant of FAP.

Gardner syndrome can be identified based on oral findings, including multiple impacted and supernumerary teeth, hypercementosis, dentigerous cysts, fused molar roots, long and tapered molar roots, multiple jaw osteomas which give a “cotton-wool” appearance to the jaws, as well as multiple odontomas, congenital hypertrophy of the retinal pigment epithelium (CHRPE), in addition to multiple adenomatous polyps of the colon. Gardner syndrome is also associated with FAP (Familial Adenomatous Polyposis) and may manifest as aggressive fibromatosis (desmoid tumors) of the retroperitoneum.

Skeletal abnormalities, the most common of which are osteomas, are an essential component of Gardner syndrome. The benign tumours are characterized by slow, continuous growth, and occur most frequently in the mandible, the outer cortex of the skull and the paranasal sinuses. The angle of the mandible is a particularly diagnostic site. The osteomas may be either exostoses, often referred to as peripheral osteomas, or endostoses, which are detectable only radiographically. The radiographic appearance of either type is a localized radiopaque lesion with a sharp border. Another type of lesion has been described, which appears as a large and diffuse radiopaque cotton wool-like area in either jaw, and is referred to as a widespread radiopaque lesion.

Osteomas in the mandible

Desmoid tumors arise most frequently from the aponeurosis of the rectus abdominal muscle of multiparous women. The extra-abdominal form is rare and desmoids of the breast may arise in the mammary gland or may occur as an extension of a lesion arising from the muscles of the chest wall. The incidence of mammary desmoid tumours is less than 0.2% of primary breast neoplasms. In Gardnerâ€™s syndrome the incidence ranges from 4% to 17%. Desmoid tumours associated with Gardnerâ€™s syndrome have been shown to have an alteration of the Î²-catenin pathway and over express Î²-catenin.

Several factors differentiate cutaneous cysts associated with Gardnerâ€™s syndrome from ordinary cysts. Firstly, these lesions occur at an earlier age than ordinary cysts, which occur around puberty. They also appear in less common locations, such as the face, the scalp, and the extremities. Similar to epidermal inclusion cysts, the cysts in Gardnerâ€™s syndrome are usually asymptomatic, however, they may become purulent and/or inflamed, and they may rupture. Other skin signs include presence of fibromas, lipomas, leiomyomas, neurofibromas, or pigmented skin lesions.