Kaposi’s sarcoma (KS) is a tumor caused by Human herpesvirus 8 (HHV8), also known as Kaposi’s sarcoma-associated herpesvirus (KSHV). It was originally described by Moritz Kaposi (KA-po-she), a Hungarian dermatologist practicing at the University of Vienna in 1872. It became more widely known as one of the AIDS defining illnesses in the 1980s. The viral cause for this cancer was discovered in 1994. Although KS is now well-established to be caused by a virus infection, there is widespread lack of awareness of this even among persons at risk for KSHV/HHV-8 infection. 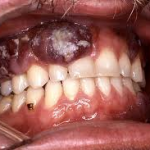 Kaposiâ€™s sarcoma (KS) is a systemic disease that can present with cutaneous lesions with or without internal involvement. Four subtypes have been described: Classic KS, affecting middle aged men of Mediterranean and Jewish descent; African endemic KS; KS in iatrogenically immunosuppressed patients; and AIDS-related KS. The erythematous to violaceous cutaneous lesions seen in KS have several morphologies: macular, patch, plaque, nodular, and exophytic. The cutaneous lesions can be solitary, localized or disseminated. KS can involve the oral cavity, lymph nodes, and viscera. Classic KS tends to be indolent, presenting with erythematous or violaceous patches on the lower extremities. African endemic KS and AIDS-related KS tend to be more aggressive. The AIDS-related KS lesions often rapidly progress to plaques and nodules affecting the upper trunk, face, and oral mucosa. The diagnosis can be made with a tissue biopsy and, if clinically indicated, internal imaging should be done.

Once the diagnosis of KS has been made, treatment is based on the subtype and the presence of localized versus systemic disease. Localized cutaneous disease can be treated with cryotherapy, intralesional injections of vinblastine, alitretinoin gel, radiotherapy, topical immunotherapy (imiquimod), or surgical excision. Extensive cutaneous disease and/or internal disease may require IV chemotherapy and immunotherapy. Discontinuation or reduction of immunosuppressive therapy is recommended when KS arises in the setting of iatrogenic immunosuppression. However, with AIDS-related KS, HAART has been shown to prevent or induce regression of KS. Some AIDS patients have complete resolution of the lesions and prolonged remission while continuing the therapy. Therefore, HAART should be considered first-line treatment for these patients, though they may require other concomitant treatments.

HHV-8 is responsible for all varieties of KS.

Classic KS as originally described was a relatively indolent disease affecting elderly men from the Mediterranean region, or of Eastern European descent. Countries bordering the Mediterranean basin have higher rates of KSHV/HHV-8 infection than the remainder of Europe.

Endemic KS was described later in young African people, mainly from sub-Saharan Africa, as a more aggressive disease that infiltrated the skin extensively, especially on the lower limbs. This, it should be noted, is not related to HIV infection. KS is prevalent worldwide.

Transplant Related KS had been described, but only rarely until the advent of calcineurin inhibitors (such as ciclosporines, which are inhibitors of T-cell function) for transplant patients in the 1980s, when its incidence grew rapidly. The tumor arises either when an HHV 8-infected organ is transplanted into someone who has not been exposed to the virus or when the transplant recipient already harbors pre-existing HHV 8 infection.

Since Moritz Kaposi first described this malignant neoplasm, the disease has been reported in five separate clinical settings, with different presentations, epidemiology, and prognoses: 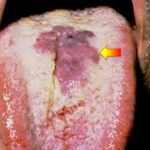 KS lesions are nodules or blotches that may be red, purple, brown, or black, and are usually papular (in other words, palpable or raised).

They are typically found on the skin, but spread elsewhere is common, especially the mouth, gastrointestinal tract and respiratory tract. Growth can range from very slow to explosively fast, and is associated with significant mortality and morbidity.

Commonly affected areas include the lower limbs, back, face, mouth, and genitalia. The lesions are usually as described above, but may occasionally be plaque-like (often on the soles of the feet) or even involved in skin breakdown with resulting fungating lesions. Associated swelling may be from either local inflammation or lymphoedema (obstruction of local lymphatic vessels by the lesion). Skin lesions may be quite disfiguring for the sufferer, and a cause of much psychosocial pathology.