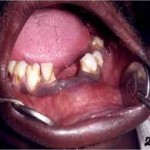 Pindborg tumor is a rare, benign, but locally aggressive odontogenic tumor, which accounts for less than 1% of all odontogenic tumors. Most investigators believe that the tumor cells originate from the reduced enamel epithelium, but today investigators believe origin from the stratum intermedium as cellular morphology is similar to tumor cells. CEOT occurs most commonly between 20 and 60 years of age with the mean age around 40 years. The distribution among men and women is equal. Most investigators agree that the central type is usually located in the premolar and molar regions with a mandibular to maxillary ratio of 2:1. It manifests as asymptomatic swelling that causes slow bone expansion, which may be associated with pain, nasal airway, obstruction, epistaxis and headache. Maxillary, tumors may present with facial alteration and proptosis. It may cause tooth tipping, migration, rotation and/or mobility secondary to tooth resorption; definitely associated with unerupted or impacted tooth. Rarely associated with paresthesia. The tumor can be extra osseous or intra osseous. Intraosseous CEOT is the more common type, accounting for more than 85% of the cases and presenting most commonly at the mandible. The incidence of extraosseous CEOT is reported to be about 6%. It occurs most commonly at the gingiva. The presentation of both intraosseous and extraosseous types is similar and both have similar histological features. 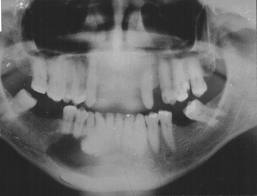 Radiographically, the tumor most commonly appears as either a diffuse or a well circumscribed unilocular radiolucent area. In some cases, the lesion becomes multilocular with a honeycomb pattern. In others, multiple radio-opacities are seen within the radiolucent area, giving rise to the term â€˜driven snow appearanceâ€™. Intraosseous CEOT shows radiolucent areas with occasional calcification, while the extraosseous type shows bone erosion near the tumor. The two commonest presentations were found to be pericoronal radiolucency with diffuse radiopacities in a radiolucent area. This makes the clinical diagnosis somewhat difficult due to the similarity with dentigerous cyst.

Histopathologically, the tumor is composed of polyhedral epithelial cells packed closely in large sheets in bland fibrous connective tissue stroma. In some fragments the tumour cells were associated with a narrow epithelial band consisting of three or four layers of flattened cells, which in some parts appeared separate from the tumour and in others more intimately associated with it. The impression obtained was that tumour cells were arising from this band in some areas Multinucleation is common with giant frequent pleomorphic nuclei and prominent inter-cellular bridges. The nuclei of the tumour cells showed great variation in size and shape and while some were vesicular, the majority appeared hyperchromatic and pyknotic. Binucleate cells were frequent and some giant forms contained 3 or 4 nuclei. In some of the large, hyperchromatic nuclei a central unstained vacuole was seen. Mitotic figures were not observed. Characteristic feature is presence of homogeneous acellular material admixed with the tumor epithelium and stroma that has been identified as amyloid, comparable to glycoprotein, basal lamina, keratin, or enamel matrix.

A: sheet of atypical epithelial cells, B: amyloid droplets with calcific dystrophications

Ai-Ru et.al in 1982 have proposed a sub classification of these features into four main patterns. Although two or more patterns may coexist in the same tumour, a predominance of one type is often seen. Briefly stated those four patterns are,

Pattern 2- Cribriform appearance of the cell arrangements, intercellular bridges might be discrete; few cell abnormalities, and calcification of the eosinophilic material filling the cribriform spaces with a Liesegang calcification pattern.

Pattern 3- Scattered or dense arrangements of the epithelial cells with varying size and multinucleated giant cells are frequent, mucoid material is present in the stroma.

According to Krolls and Pindborg, the presence or absence of calcification in CEOT has prognostic implications. A lack of calcification indicates less tumor differentiation and hence favors more chance of recurrence. Pindborg has also reported recurrence after removal in a CEOT that had minimal calcifications (Pindborg, J.J: Personal communication, 1974). The absence of calcification not only posed difficulties in diagnosing this rare tumor but also warranted an aggressive treatment approach. Prompt recognition of this variant can guide surgical management and alert the clinician to the need for extended follow-up.

The treatment for CEOT has ranged from simple enucleation or curettage to radical and extensive resection, such as, hemimandibulectomy or hemimaxillectomy. The prognosis of CEOT is good with infrequent recurrence with the recurrence rate of 14 % and recurrent lesion may not be manifested for many years.