Ameloblastoma (from the early English word amel, meaning enamel + the Greek word blastos, meaning germ) is a rare, benign tumor of odontogenic epithelium (ameloblasts, or outside portion, of the teeth during development) much more commonly appearing in the lower jaw than the upper jaw. It was recognized in 1827 by Cusack. This type of odontogenic neoplasm was designated as an adamantinoma in 1885 by the French physician Louis-Charles Malassez. It was finally renamed to the modern name ameloblastoma in 1930 by Ivey and Churchill.

While these tumors are rarely malignant or metastatic (that is, they rarely spread to other parts of the body), and progress slowly, the resulting lesions can cause severe abnormalities of the face and jaw. Additionally, because abnormal cell growth easily infiltrates and destroys surrounding bony tissues, wide surgical excision is required to treat this disorder.

Ameloblastomas are often associated with the presence of unerupted teeth. Symptoms include painless swelling, facial deformity if severe enough, pain if the swelling impinges on other structures, loose teeth, ulcers, and periodontal (gum) disease. Lesions will occur in the mandible and maxilla,although 75% occur in the ascending ramus area and will result in extensive and grotesque deformitites of the mandible and maxilla. In the maxilla it can extend into the maxillary sinus and floor of the nose. The lesion has a tendency to expand the bony cortices because slow growth rate of the lesion allows time for periosteum to develop thin shell of bone ahead of the expanding lesion. This shell of bone cracks when palpated and this phenomenon is referred to as “Egg Shell Cracking” or crepitus, an important diagnostic feature. 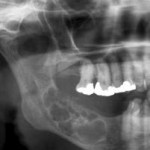 Ameloblastoma is tentatively diagnosed through radiographic examination and must be confirmed by histological examination (e.g., biopsy). Radiographically, it appears as a lucency in the bone of varying size and featuresâ€”sometimes it is a single, well-demarcated lesion whereas it often demonstrates as a multiloculated “soap bubble” appearance. Resorption of roots of involved teeth can be seen in some cases, but is not unique to ameloblastoma. The disease is most often found in the posterior body and angle of the mandible, but can occur anywhere in either the maxilla or mandible.

Ameloblastoma is often associated with bony-impacted wisdom teethâ€”one of the many reasons dentists recommend having them extracted.

Histopathology will show cells that have the tendency to move the nucleus away from the basement membrane. This process is referred to as “Reverse Polarization”. The follicular type will have outer arrangement of columnar or palisaded ameloblast like cells and inner zone of triangular shaped cells resembling stellate reticulum in bell stage. The central cells sometimes degenerate to form central microcysts. The plexiform type has epithelium that proliferates in a “Fish Net Pattern”. The plexiform ameloblastoma shows epithelium proliferating in a ‘cord like fashion’, hence the name ‘plexiform’. There are layers of cells in between the proliferating epithelium with a well-formed desmosomal junctions, simulating spindle cell layers. 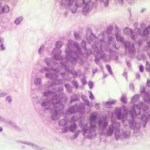 The acanthomatous variant is extremely rare.

One-third of ameloblastomas are plexiform, one-third are follicular. Other variants such as acanthomatous occur in older patients. In one center, desmoplastic ameloblastomas represented about 9% of all ameloblastomas encountered.

While chemotherapy, radiation therapy, curettage and liquid nitrogen have been effective in some cases of ameloblastoma, surgical resection or enucleation remains the most definitive treatment for this condition. In a detailed study of 345 patients, chemotherapy and radiation therapy seemed to be contraindicated for the treatment of ameloblastomas. Thus, surgery is the most common treatment of this tumor. Because of the invasive nature of the growth, excision of normal tissue near the tumor margin is often required. Some have likened the disease to basal cell carcinoma (a skin cancer) in its tendency to spread to adjacent bony and sometimes soft tissues without metastasizing. While not a cancer that actually invades adjacent tissues, ameloblastoma is suspected to spread to adjacent areas of the jaw bone via marrow space. Thus, wide surgical margins that are clear of disease are required for a good prognosis. This is very much like surgical treatment of cancer. Often, treatment requires excision of entire portions of the jaw.

Radiation is ineffective in many cases of ameloblastoma. There have also been reports of sarcoma being induced as the result of using radiation to treat ameloblastoma. Chemotherapy is also often ineffective. However, there is some controversy regarding this and some indication that some ameloblastomas might be more responsive to radiation that previously thought. 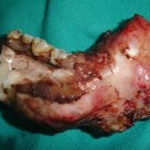 Surgical excision of the jaw affected by ameloblastoma