The disc is thick all around its rim, and thin in the centre. From anterior to posterior it shows – anterior extension, thick anterior band (2.0mm thick), intermediate thin zone (1.0 mm thick), thick posterior band (3.0 mm thick) and posterior most bilaminar region (Dubrul, 1996; Williams et al, 1999). The disc is attached all around the joint capsule except the strong straps those fix the disc directly to the medial and lateral condylar poles which ensures that the disc and condyle move together in protraction and retraction (Choukas and Sicher, 1960; Williams et al, 1999). The anterior extension of the disc is attached to fibrous capsule superiorly and inferiorly and through that to temporal bone and the mandibular neck respectively. In between it gives insertion to lateral pterygoid muscle where the fibrous capsule is lacking and synovial membrane is supported only by loose areolar tissue. In the opinion of Kreutziger and Mahan (1975), this deficiency anteriorly is the weak point since there is no fibrous resistance to hypertranslation. Apart from lateral pterygoid, anteromedially, there are attached some fibres of masseter and temporalis laterally. Although more than one muscle is inserted into the disc, majority of the interest has been focussed on lateral pterygoid, whose deep position, unfortunately makes it difficult to investigate under natural conditions (Moore). 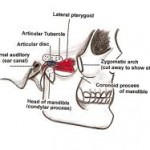 The anterior and posterior bands have predominantly transversly running fibres while thin intermediate zone has anteroposteriorly oriented fibres. Posteriorly the bilaminar region consists of 2 layers of fibres with loose connective tissue separating these. The upper layer has been shown by Griffin and Sharpe (1960) to be composed of elastin and is attached to postglenoid process and its medially extended ridge which is the true posterior boundary of the joint. It prevents slipping of the disc while yawning (Dubrul, 1996). The inferior layer of the fibres curve down behind the condyle to fuse with capsule and back of condylar neck at the lowest limit of the joint space. It prevents excessive rotation of the disc over the condyle. In between the two layers is sandwitched an expansile, soft pad of blood vessels and nerves wrapped in elastic fibres which aid in contracting vessels and retracting disc in recoil of closing movements (Dubrul, 1996).

The disc is primarily cartilagenous but Mathews and Moffet (1974) report the presence of chondroid cells. Thilander et al (1976) also noted that at birth the cells are mainly fibroblasts but with increasing age, chondroid cells are present. They also found that disc is vascular at birth but later on the central region becomes avascular. Earlier Blackwood (1965) had reported that condyle is also vascular at birth with vessels anastomosing over the articular surface but these disappear by age of three years. Wright and Moffet (1974) studied the post natal development of disc upto 21 years and found it to be flat at birth, developing its sigmoid profile as the articular eminence enlarges. Williams et al (1999) considered the macroscopic evidence of degeneration (fraying, thinning and perforation) found from fifth decade onwards as normal ageing. They further quote Weisengreen (1975) who found such degeneration in 40% of 183 individuals between 40-90 years of age. Blackwood (1963) noted that when the disc was perforated the degenerative changes were detected in articular eminence suggesting that disc and condyle may well suffer the initial phase of degenerative changes and upper compartment is affected only when the disc is perforated.

Various functions attributed to the disc are

(i) it acts as a buffer and shock absorber;

(ii) makes the articulation between saddle shaped glenoid cavity above and convex head of mandible below more harmonious;

However none of these is confirmed experimently. Although the joint can function without a disc, as shown by menisectomy operations, it is not long before it shows signs of excessive wear. 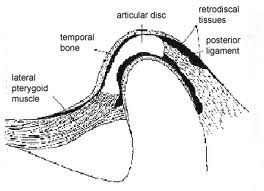 On each side of the skull are, the collateral ligaments of the bilateral jaw joints. The ligament of each side is designed in two distinct layers, a wide outer or superficial layer and a narrow inner or deep band. The outer layer is usually fan shaped and arises from outer surface of articular tubercle and posterior most part of zygomatic arch. There is often a raised, roughened bony ridge of attachment on this area. The ligamentous fascicles run obliquely downwards and backwards to insert on the back of mandibular neck behind and below the lateral condylar pole. Immediately medial to this layer, a narrow ligamentous band arises from crest of articular tubercle continous with attachment of outer portion at this site. This inner band runs horizontally back as a flap strap to lateral pole of condyle. An upper part of this band continues on to attach to the back of disc. There is no comparable double layered reinforcement on the medial side of condyle, but a medial horizontal band is present at a lower level. Medial slippage of condyle is prevented medially by entoglenoid process and laterally by temporo mandibular ligament. This arrangement is remarkably similar to that of knee joints which has two femoral condyles curbed centrally by raised intercondylar eminence of tibia and restrained peripherally by collateral ligaments (Dubrul, 1996). Nell et al (1996) have described various macroscopic and microscopic variations in the ligament. The outer oblique band gets taut in that protraction of condyle which accompanies opening of jaw, thus limiting the inferior distraction of condyle in forward gliding and rotational movements, while the inner horizontal band gets tightened in retraction of head of mandible thus limiting posterior movement of condyle (McMinn, 1994).