Dental osteomyelitis (or osteomyelitis of the jawbone) is an acute or chronic jawbone infection, usually caused by bacteria. It is extremely difficult to diagnose and treat. 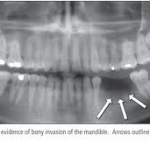 Physical symptoms that cannot be diagnosed as a particular disease, such as extreme fatigue or “chronic fatigue,” and joint pain and/or edema in areas of the body distant from the jawbone are often due to hidden bacterial infections in the jawbone that are spreading toxins throughout the body.

Diagnosis is hindered by the fact that X-rays (even digital and/or panoramic) often do not detect dental osteomyelitis. Add to that the absence of facial pain in most cases, the reluctance most dentists have in removing dead teeth, and the devastation people feel about losing their teeth, and we have millions of people in our culture with hidden dental infections.

Treatment is complicated by poor blood flow in the infected area in the jawbone, which prevents antibiotics from reaching the site.

One common cause of dental osteomyelitis is periodontal disease (called gingivitis, pyorrhea, or periodontitis, depending on how advanced it is).

It has been reported several times recently in the newspaper that there is a connection between heart attacks and periodontal disease.

Periodontal disease is caused by a deficiency disease called scurvy that is easily cured by taking vitamin C capsules and citrus bioflavonoid capsules periodically throughout each day. Early signs of scurvy (or periodontal disease) are bleeding gums when brushing or flossing your teeth, and/or receding gums.

Note: If you decide to take vitamin C and bioflavonoids to help your teeth and gums, take the vitamin C to bowel tolerance. This means to increase the amount you take each day until you develop diarrhea, then take less than that the next day and stay at that amount until you develop diarrhea again, then take less again until you can continue to take the “correct amount for you” for the rest of your life. Take 2,000 to 6,000 mgs of citrus bioflavonoid capsules daily (more to begin with, then taper off to 2,000 mgs). (Many other vitamins and minerals (such as vitamin B Complex, vitamins A and D, calcium, magnesium and trace minerals) are also helpful in maintaining healthy teeth and gums, but none are as crucial as vitamin C and bioflavonoids. (It is a good practice to take vitamin C to bowel tolerance whenever you feel feverish, develop a sore throat or have any sign of infection anywhere.)

Please be aware however that vitamin C and bioflavonoids cannot protect against a hidden bacterial infection. Taking vitamins and minerals will support your immune system and I believe taking them explains why some people can remain symptom-free even though they may have a hidden jawbone infection.

Another common cause of the development of dental osteomyelitis is when bacteria are left in the bone after a tooth is extracted.

This occurs due to poor surgical cleanup of the site of the extracted tooth and a pocket containing bacteria is left in the bone. This causes the jawbone to make new bone over the hole instead of making new bone in the hole, which leaves a hollow space in the jawbone (called a cavitation). Cavitations have been found through tissue analysis to be ischemic (lacking in blood flow), necrotic (dead), osteomyelitic (bone-infected), gangrenous and therefore very toxic. A cavitation stays there, producing toxic waste and destroying the surrounding bone, and putting a toxic load on the immune system, until an oral surgeon removes it.

A third common cause of dental osteomyelitis is root canals. After a tooth has been root canalled the infection that caused the tooth to need the root canal procedure often is not completely removed and as long as it remains in the jawbone it will go on producing toxins that destroy the surrounding bone until the tooth and the surrounding dead bone is removed. Any dental surgery, facial trauma involving the teeth, the application of braces on the teeth, or the wearing of any type of “appliance” such as a “bridge” that puts stress on the teeth (anything that pulls the teeth away from the walls of their sockets) can cause dental osteomyelitis to begin.

Any facial trauma, dental surgery, widening of the roof of the mouth (orthodontists do this by separating the bone of the roof of the mouth), the application of braces on the teeth, or the wearing of any type of “appliance” such as a “bridge” that puts stress on the teeth (stress on the teeth means anything that wears away the enamal of a tooth or that pulls the root of a tooth away from the walls of its socket, which happens painlessly, below the gum line, out of sight, and in the jawbone) can cause dental osteomyelitis to begin. 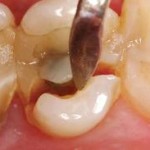 Dental osteomyelitis may develop from teeth that have been damaged by too much fluoride in the diet or by Tetracycline given to a child under the age of five as either one will cause the teeth to become brittle and fracture easily. These fractures allow normal mouth bacteria to enter into the bloodstream and spread toxins throughout the body. Remember what Dr. Clark wrote in The Cure for All Cancers: “The mouth is always a ‘den of bacteria.'”

Dry mouth, which can be caused by many prescription and non-prescription drugs, is another cause of dental osteomyelitis. Saliva has the ability to neutralize the acid produced within dental plaque and is one of the major mechanisms by which it protects teeth from decay. Depending on the amount of time the teeth have been unprotected by normal amounts of saliva, they will become decayed, become loose, and fall out.