When deciding the appropriate management of a dental patient prescribed warfarin, three questions must be answered: (1) why is the patient on warfarin? (2) is it necessary to modify the warfarin regimen? And (3) how should the regimen be modified?

Suturing the surgical site will assist in hemostasis

The reason for anticoagulation therapy may indicate the need for other precautions. For example, patients with a prosthetic heart valve are at high risk of infective endocarditis. Prophylactic antibiotic therapy will be required during procedures that carry a risk of bacteremia. The importance of taking precautions when treating patients who have suffered a myocardial infarction or stroke cannot be overemphasized. The reason for anticoagulation determines the warfarin dose and the target INR. The need to modify a given anticoagulation regimen depends on the dental treatment plan. Wherever possible, the procedure that carries the least risk of bleeding should be selected.

Warfarin blocks vitamin K which is used to make clotting factors 2-8 and hence takes time to work until the circulating factors are depleted -about 3 days. The effective half-life of warfarin ranges from 20 to 60 hours, with a mean of about 40 hours. The duration of effect is 2â€“5 days. The drug is completely absorbed after oral administration, and peak concentrations occur within 4 hours. The elimination of warfarin is almost entirely by metabolism, with very little excreted unchanged in the urine and bile. It is broken down by the liver.

Warfarin is bound to plasma proteins and hence those drugs that affect protein production eg digoxin interfere with its effects. It stops clots from forming but does nothing to those already formed and does not stop platelets from aggregating.

Warfarin is measured by INR, a modified form of Prothrombin Time, and can be given orally in 1-3 mg tablets or via a peripheral vein slowly over 2 mins – 5mg vials after mixing with water.

Initiation is with a dose of 2-5mg oral once daily, or iv or rarely 10mg for 2-3 days and then INR. Heparin is started with the first dose and then discontinued once INR is satisfactory.

Mostly the local hospital will set the guideline and the aim should be to keep with 0.5 of it. For TIAs aspirin alone is preferable 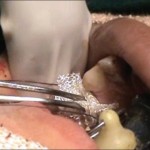 Surgicel can be placed to accelerate clotting of blood

INR is done daily and then at longer intervals till 12 weekly.

For a major bleed warfarin is stopped and 5mg vit K is given slowly over 2 mins and also fresh frozen plasma or prothrombin concentrate.

For INR 6-8 and minor or no bleeding, stop warfarin and recheck INR daily and restart when INR is less than 5

INR more than .5 above, stop warfarin and restart when less than 5

Has a rapid onset and offset of action and so is given subcutaneous or as slow iv infusion.

Given the short half-life of 60 minutes, there will be rapid normalisation of the aPTT within 2-3 hours. 10,000 units loaded initially and then 15-25u/kg/hr according to aPTT levels. It is used for 3 days till warfarin starts to take effect. It is
used in arterial blockages, dvt, pumlonary embolism, unstable angina and for prophylaxis in surgery (5k 2 hours pre surgery and then subcutaneously twice daily for seven days, or till patient can walk).

If bleeding occurs it is withdrawn and sometimes protamine sulphate can be given. If used longer than five days, platelet counts need to be done. Low molecular weight heparins have longer duration of action and can be used once daily.

1) A baseline full blood count, PT and aPTT should be performed prior to heparin therapy. A Haematologist should be consulted if there are significant baseline abnormalities.

2) Full blood count should be performed at least three times per week, to exclude heparin induced thrombocytopaenia and a fall in haemoglobin to suggest bleeding. 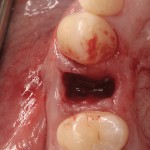 A normal extraction socket, with normal amount of bleeding

3) Where the therapeutic intention is anticoagulation for venous thromboembolism, non-steroidal anti-inflammatory drugs (NSAIDs) should be ceased to reduce the risk of bleeding.

Aspirin stops platelets from aggregating and is used in doses from 75mg to 300mg daily for prophylaxis after transient ischaemic attacks , heart attacks and surgery . It is not used in children under 12 because of the very rare Reye’s syndrome. It can cause bleeding from the stomach. Low-dose aspirin therapy should not be stopped before dental surgical procedures. Local hemostatic measures (sutures, packing, or packing with 10 percent tranexamic acid) was sufficient to control bleeding in the few cases experiencing excessive bleeding.