A post and core is a dental restoration, which is used to sufficiently restore a tooth morphology followed by future restoration such as a crown, when there is no an adequate part of tooth hard tissue regarding to the required clinical indication of the case, due to loss of tooth structure as a result of decay, fracture or other causes. Post and cores can be referred as one of the foundation restorations. 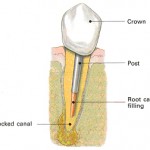 Deciding Post in the Root or Not – The decision to place a post in the root canal is based depending on the amount of tooth structure remaining above the gum line. If sufficient amount of tooth structure is present above the gum line and a small access cavity is present, then there is no need for placement of post. The tooth is just filled with a filling material and crown is placed over it if it is required.

But if large amount of tooth structure is missing above the gum line, a post has to be placed inside the root canal so that crown can be retained properly over it.

Post and cores divide into two main groups: prefabricated and cast. Both of these systems employ a post that is placed within the root canal of the tooth being restored. Thus the tooth must first be endodontically treated. After the endodontic procedure has been completed, and the root canal(s) is/are filled with the inert gutta percha root canal filling material, some gutta percha is removed from the canal space, usually by a series of endodontic files that prepares and shapes the root canal. The space that exists coronal to the remaining gutta percha, called the post space, is now available within which to place a post. It is desirable to leave sufficient root filling material in the apical area to maintain an apical seal. 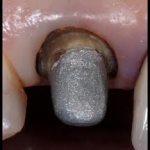 Completed post and core as seen in the mouth

In post and core fabrication, it is desirable that the post descend at least two third of the length of root canal (or not less than the height of the crown) in order to provide sufficient retention.

Basically, it is important to leave at least 5 mm of gutta percha at the apex of the root canal, even at the expense of a longer post, because it is within the apical 5 mm of the root canal that the apical delta anastomose with the exterior surface of the root. Should these lateral canals not be blocked with the gutta percha and the cement used to place the gutta percha, the chances of microleakage and percolation of microbes are greatly increased, thereby increasing the likelihood of an endodontic failure.

It is not necessarily the length of the post within the root canal that provides for retention of the core, and thus the eventual crown, but rather the length of post that will exist within root structure that exists within surrounding bone. If the post is 16 mm long, but only extends 4 mm into root structure that is surrounded by solid bone, the restoration will have a poor prognosis. This consideration of crown-to-root ratio is essential when evaluating the tooth for a crown lengthening procedure.

In the picture at right, the two teeth on the extreme left and right are the ones under discussion. The two teeth in the middle have been endodontically treated, but do not have post and cores. 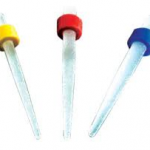 Prefabricated post and cores take less time to place, as they do not involve any lab work and can be inserted immediately upon the decision to utilize them, once the endodontic therapy has been completed and the post space cleared of gutta percha. After the prefabricated post is properly cemented into the post space, a core material, such as Dental composite, can be packed around the cemented post. After the material has been cured or has had a chance to set and properly formed into a crown preparation, an impression can be taken for the fabrication of a prosthetic crown.

In cases where the post space is not a good match for a prefabricated post, a cast post and core can be custom fabricated for the tooth. A resin pattern is produced by placing a preformed plastic “burnout” post into the post space and a resin material, such as Duralay resin, is used to build up the tooth to the proper dimensions. When this is completed, the pattern resin/plastic post is removed from the tooth structure and attached to a sprue former, much in the same way as a is done with the wax pattern of a crown, and a single-unit cast post and core can thus be fabricated out of gold, titanium or another metal using the lost-wax technique. Where a metal post could be difficult to conceal a custom post made of Zirconia Oxide can be made, it’s tooth colour leaves less of a shadow under the final restoration. Alternatively an impression can be taken of the post space and dental arch using a plastic post and a polyvinylsiloxane impression material, and this used to construct a suitable post in the dental laboratory.