Spaced dentition is characterized by interdental spaces and lack of contact points between the teeth. Spacing can be localized or generalized due to the number of teeth included. It is a common esthetic problem for many patients. A study in European adults showed that patients with broad midline spacing were perceived as being less socially successful and having lower intelligence. 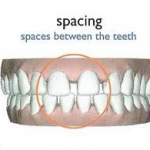 Each person is unique, and no one case presents a definitive reason why a space is present. Genetics can play a major role in how teeth form in your mouth. If your parents have spacing between their teeth, it is a good chance that you will also.

Adults can also have habits, like forcing their tongue against their upper teeth or pen biting, which can gradually shift teeth throughout life. When the teeth shift, spacing or even jaw joint pain can occur.

How to Correct the Spaces Between Your Teeth

In patients with oral habits, space closure and orthodontic management of teeth should not be attempted unless the patient has stopped the habit. Before orthodontic treatment, instruction about true tongue positioning during functional movements like speech and swallowing were given. These exercises were continued during treatment to adapt the musculature to new function.

There are four ways to correct the spaces between your teeth. Diagnosing the reason the spaces are present will determine which of the treatments will best suit your needs.

Gaps between teeth can be filled by: 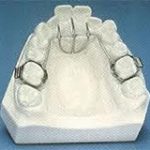 Placing braces on your teeth in order to move them into their correct position is usually the most ideal treatment. Using orthodontics to move the teeth is the most time consuming, but it is also the most beneficial. Orthodontics is used to place teeth so that your bite is in harmony with your smile. Diagnostic set-up of dental casts may be useful for treatment planning and patient information in cases of spaced dentition. The diagnostic set-up of this patient allowed us to evaluate the dental arches in three dimensions. Orthodontic space closure was planned by retracting labially inclinated incisors to achieve normal overjet and overbite relationship.

All of the other treatments to fill the spaces, including tooth bonding, dental veneers, and dental crowns, although they are very good treatments, are considered esthetic and functional compromises, and should be discussed with us in order to determine which restorative dentistry treatment is best for you.

Spacing should be corrected because it can:

Leeway space is the size differential between the primary posterior teeth (canine, first and second molars labeled C, D and E in the picture), and the permanent canine and first and second premolar (labeled 3, 4 and 5). Usually the sum of the primary tooth widths is greater than that of their permanent successors. So when these primary teeth fall out, there is usually a slight amount of space (about 2.5mm per side in the lower arch and 1.5mm per side in the upper arch). We can use this to our advantage to gain space to help relieve crowding. If nothing is done to preserve this space, the permanent first molars almost always drift forward to close it.

“E” space can be thought of as a subset of the leeway space. This refers only to the size differential between the E’s and the 5’s in the mixed dentition. The distinction is made between Leeway Space and “E” Space since in the typical eruption pattern, the lower E’s are the last primary teeth to be lost in the lower arch, and frequently the 3’s and 4’s are fully erupted. If the orthodontist sees the patient after the 3’s and 4’s are already erupted, the only size differential that needs to be taken into consideration is that between the E’s and 5’s.