The lower trial denture extension should be tested with the patient mouth is opened no more than half opened position. To allow the surrounding musculature is in an acceptable state of relaxation.
â€¢ Labial and buccal extensions are checked as for the upper trial denture.

Lingual extension is checked as follows:

Ask the patient to protrude the tongue to moisten the lips. If the denture base lifts at the back so, the lingual pouch is overextended.

Ask the patient to move the tongue to bring the tip of the tongue into contact with the check on each side so, any displacement of the trial denture which arises note the site which extent.

The under extension is determine by the intraoral examination as the depth of the sulcus will be greater than that of the denture flange.

Ask the patient to curl the tongue backwards to touch the posterior palatal tissues by the tongue tip; if the trial denture lifts in the front, it is overextended.

In all cases the denture flanges should be reduced in depth and / or thickness until displacement no longer arises.

The lower denture should cover the retro molar pad to buttress the denture against the backward pressure of the lower lip. 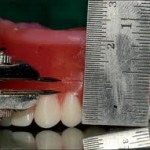 Retention:
Usually the lower denture retention is poor when compared to the upper denture due to:
1. Small denture bearing area
2. The difficulty in obtaining an efficient border seal.

Testing of the lower trial denture retention:
a) Ask the patient to open his mouth slightly and let his tongue touch the cingula of the lower anterior teeth, support the chin of the patient with the left hand and pull the teeth straight upwards to check the retention of the anterior labial and lingual flanges.
b) Tilt the lower trial denture outward from the canine region to test the retention of the opposite retro molar pad.

Tongue space: Natural teeth occupy a position in the mouth where the inward pressure of the lips and the checks is neutralized by an equal and opposite outward pressure of the tongue, and it is in this zone of neutral pressure that the artificial teeth must be set (neutral zone).
N.B. To check for the neutral zone in the patient s mouth, let the patient open his mouth half-way and touch the lower anterior teeth with the tip of his tongue, while his tongue is relaxed. Feel the amount of pressure exerted by the tongue and check on the lower teeth, using a plastic filling instrument. Pressure should be roughly equal on the lingual and buccal sides of the teeth. 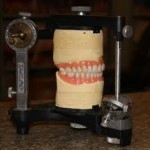 The crest of the edentulous ridge changes according to the pattern of ridge Resorption, while the position of the neutral zone remains fairly constant. In Case of excessive resorption of the ridge labially, the crest of the ridge may thus moves lingually. Setting of anterior teeth on the crest of the ridge may then interfere with the position of the neutral zone. This result in a sunken lip, Distorted facial appearance and crowing of the tongue.
The back teeth should lie in the neutral zone to avoid check and tongue biting. Naturally the upper posterior teeth overlap the lowers buccally. The upper buccal Cusps push the check away from the occlusal table, while the lower lingual cusps keep the tongue away from the occlusal table.
During chewing, the food lie on the occlusal surfaces of the lower teeth, as the mandible closes, the crushed food escape both to the buccal and lingual. The tongue and the buccinators muscles team up to push the food back onto the food table. If the teeth are too far buccally, the tongue cannot function properly; if the teeth too far lingually, the buccinators cannot function well and the food will pile up in the buccal pouch.
The tongue is more mobile than the checks will cause greater instability of the lower denture.

Cramped tongue may be due to:

Testing of the tongue space