Smoking cessation is an essential component for the successful treatment of periodontal disease as there is little rationale for treating periodontitis without eliminating one of the major causes of the disease. Thus, there is also the question of whether periodontal surgical treatment is indicated without a commitment by the patient to quit smoking. As with other smoking diseases, cessation is only the first step of a long healing process where the smoker often does not approach the lower risk of the nonsmoker for 10 to 20 years.

How does smoking affect your gums?

Gum improvement is more rapid following smoking cessation although a bit idealistic. Usually a smoker’s gum has a glazed fibrotic (excessive fibrous connective tissues) appearance with rolled edges after years of smoking. Bleeding is minimal on brushing. It is believed that this is due to the local effect of the tobacco smoke possibly suppressing the inflammatory reaction. This local and direct effect of components in the cigarette smoke are believed to also account for a greater amount of pocketing that occurs in the front teeth. However, about 10 to 12 weeks after quitting smoking, there is an increase in bleeding, possibly caused by a recovery of the inflammatory response. About a year after cessation, the fibrotic, thickened anatomy of the gums begins to assume a more normal appearance and the periodontitis appears to stabilize. For the majority of patients, gum attachment loss ceases or dramatically slows.

The present methods for prevention and treatment of gingivitis and periodontal disease emphasize the need for meticulous day-to-day oral hygiene procedures. Even so these preventive actions are not intended to, nor are they adequate to continuously replace a compromised portion of the immune system brought on by smoking. Where smoking occurs, the chemical and manual methods of plaque control still help to reduce the bacterial challenge. However, with round-the-clock impaired humoral and cellular body defenses, and with an impaired gum fibroblastic repair capability, the entire defense and recovery process is jeopardized.

How does smoking affect other parts of your body

The risk of mouth cancer is reduced when a smoker quit smoking, so by 5 years it is down to that of a nonsmoker. However, stopping smoking is not merely difficult but may bring other problems. Aggravation or the onset of recurrent aphthous ulcer is noted by some, while others take to eating sweets as a substitute for smoking and may then have more cavities, or put on weight.

Below is a list of disease associated with cigarette smoking besides periodontal disease which can be prevented with smoking cessation: 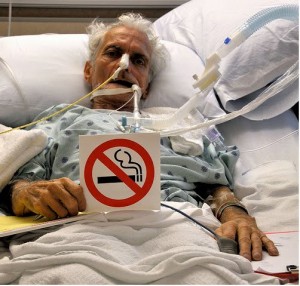 Furthermore, tobacco smoke released into the environment by smokers, commonly referred to as environmental tobacco smoke and which is responsible for secondhand smoke (passive smoking) has several harmful effects on people who inhale it. It causes a small rise in the risk of lung cancer in adults and greatly increases the risk of respiratory illnesses in children and sudden infant death. Smokeless tobacco, for example snuff dipping in women in the southeast of the USA, who place snuff in between their cheeks, has been shown to more susceptible to gum and jaw bone cancer close to where the snuff is placed. However, the risk is low.

How to stop smoking

There is a need to provide smoking cessation counseling programs as an integral part of the periodontal treatment plan. The American Cancer Society, American Heart Association, and American Lung Association sponsor many “No Smoking” classes throughout the nation to facilitate smoking cessation. For youthful smokers and potential smokers, the emphasis should be on smoking avoidance and refusal techniques. This task can probably be best accomplished in the public-school system.

The outcome of such counseling will probably be more successful if linked with a discussion of the great amount of preventable outcomes caused by active and passive smoking and the use of smokeless tobacco. To identify the nearest location of no-smoking classes in the United States, call 1-800-LUNG-USA.

Smoking cessation should be a gradual process, because withdrawal symptoms are less severe in those who stop smoking gradually than in those who quit quickly. Rate of relapse are highest in the first few weeks and months, and diminish considerably after 3 months. Pharmacological treatments combined with psychological treatment results in some of the highest long-term abstinence rates, and include nicotine chewing gum, nicotine transdermal patches and bupropin.

2 thoughts on “How Does Smoking Affect Your Gums Part 2”