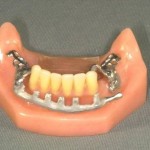 However, it is infrequently used by clinicians because it is technique-sensitive, especially during hinge and lock fabrication, and the durability of the retentive element of the locking mechanism decreases with the progressive wear of the metal latch attachment. In addition there is questionable durability of retention of the snap-lock system, which decreases as the metal latch attachment wears from repeated opening and closing. Therefore, the conventional SL-RPD is also not generally accepted as an alternate treatment modality by dental educators. Only 54% of the American dental schools teach swing-lock procedure, and only 14% of the dental students will complete an SL-RPD before graduating. A  new design for a swing-lock RPD by use of a vertical bar and plastic clip attachment as an alternative to the hinge and latch attachment. The suggested modification hi the locking mechanism may overcome some of the problems associated with the conventional swing-lock RPD. 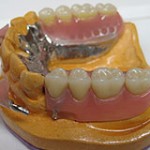 A Swing-Lock®-designed partial can stabilize mobile teeth and offer cosmetic enhancements. It can also add or repair facial contouring and work as a hidden clasp design partial where retaining struts are placed below or above the lip reflection lines. Swing-Lock partials are also used when there is very little undercut to clasp and they are very easy to add to in the future. This type of partial evenly distributes load among all supporting teeth, relieves the immediate stress on adjacent abutment teeth (as would occur with circumferential clasping), and passively engages all abutments during mastication.

The typical Swing-Lock® partial utilizes a lingual plate with a labial bar connected by a hinge on one side and latch on the other. The labial bar and struts, working in conjunction with the lingual plate, lock in and hold the anterior teeth. In many cases, this partial design can actually strengthen the supporting distal abutments because it relieves stress.

A Swing-Lock® design is also beneficial when a bite problem is causing pressure and migration of unsupported teeth, making splinting (stabilizing mobile teeth) necessary. The design allows you to even out the force over all the load bearing abutments, not just individual abutments. Also, locking the abutments in a stationary position can stabilize the root of the tooth. 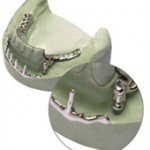 Struts can be placed on tooth gingivally for aesthetic purposes

The major indications for the use of an SL-RPD include:

(1) missing or weakened key abutment teeth, such as a bilateral distal extension to replace all but a few incisors and one canine,

(2) mobility in patients who have undergone periodontal therapy or have major bone loss and require some type of stabilizalization, and